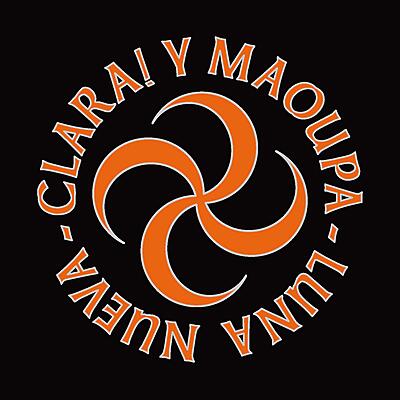 Based in Brussels, Belgium, but originally from northern Spain, Clara! brings a strong knowledge of reggaeton, perreo and trap absorbed from beach parties and clubs back home to a wickedly offset batch of productions by Maoupa, who’s arguably earned a mean reputation in recent years for his killer mixtapes with the PRR! PRR! gang, as well as a slew of 12”s for everyone from Unknown Precept and Mannequin to Arma since 2014.

Together they throw down eight distinctive vocal cuts on disc 1, while disc 2 is loaded with their singular instrumentals. Clara! dispatches ice cool but barbed bars in diverse flows, bewitching Maoupa’s rhythms with on point style in the dramatic ‘Badman’ - a bullet for the male gaze - while layering herself in choral cadence on a spellbinding cover of Faltiquera’s Galician folk song ’Sum Sum’ over unusual tablas and drones..

But while the finer details of Clara!’s pointed but humorous lyrics may be lost on non- Spanish speakers, her co-productions with Mauopa are bound to resonate regardless of tongue, with strong, dare-to-be-different highlights in the hard and psychedelic drive of ‘Gaviléan’ and the bolshy bashment grind of ‘Virgo’, along with straight up freaky gear such as ‘Baja Y Suda’, plus their cold fusion of reggaeton and Mahraganat influences in ‘Secreto Ritual’, and warped hypermodernism in ‘Clarividencia.’ No matter what angle or language it’s approached from, ‘Luna Nueva’ cycles fresh and luminous with a steadfast yet experimental call to the ‘floor while the world collapses around them.