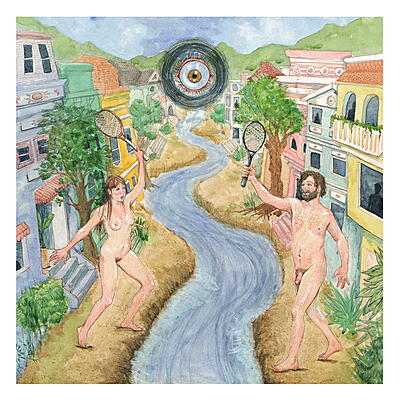 Preise inkl. 19 % USt, exkl. Versandkosten.
Sendungen außerhalb EU sind 15,96% günstiger.
As West-Coast gentrification washes a wave of loud and gritty garage bands away from San Francisco, Cool Ghouls stand strong. Just like the most revered, political records of the 60s and 70s, the third album Animal Races channels the past, the present and the future with an authentically fresh psych-rock take on American society through its own neo-cosmic language.

“San Francisco has always been great and hopefully always will be but these days there are things we despise,” tells Ghoul guitarist and vocalist Pat McDonald, “the lifestyle The Bay once afforded artists has been decimated. This gold-rush of the tech industry is forcing prices up and it’s been a flood of bullshit. Some people are being forcibly displaced, others are disheartened and leave by choice. Our song ‘Never You Mind’ is a reminder to the creative community not to roll over. San Francisco isn't dead until you let it die in your heart.”

It’s impossible to separate Cool Ghouls from their adopted hometown. Whether playing dollar dice games and shooting pool or stepping out for a walk through the Californian hills, this is a band who swapped their young lives in stripmall suburbia to settle in the Shaky City of their electric heroes. The place where Gram Parsons’ Flying Burrito Brothers unwittingly inspired lesser-known followers of the Cosmic American gospel to commit readings to tape, Cool Ghouls slot right in the city’s rich musical lineage. Pat M, with Pat Thomas (bass/vocals), Ryan Wong (guitar/vocals), and Alex Fleshman (drums), made their own celestial pilgrimage to their place of worship and have established themselves as one of the city’s brightest young bands playing, against the backdrop of a chaotic big city, a laid-back psych-rock sound for the here and now.

Those who fell for the raw, primitive sound of the band’s 2014 album A Swirling Fire Burning Through the Rye recorded with local hero Tim Cohen of The Fresh & Onlys, will be pleasantly surprised by the Ghouls’ latest evolution in sound. This time recorded with melodic maestro Kelley Stoltz in his backyard Electric Duck studio, the album was mixed and mastered by Mikey Young (Total Control / Eddy Current Suppression Ring), and features full-colour artwork by Shannon Shaw of Shannon and The Clams.

“Animal Races is the harvest of work we created between last year’s tours, working in bars, record stores and coffee shops,” says Pat M. “We chose the title because the song’s lyrics are a broad characterization of society. So any track on the album, whether it be about love, personal growth, death or whatever, takes place in the setting of the 'animal races' ".

Commenting just as much on the individual’s place in society as the San Francisco community itself, the theories of ‘self-actualization’ and ‘anima’ by Swiss psychiatrist Carl Jung about achieving individual potential pervade ‘If I Can’t Be The Man’ and ‘Material Love’. Whether time-hopping from the summer of love on ‘Sunrise’ or channelling the freewheeling feeling of The Grateful Dead and Canned Heat through loud guitars, acid riffs, party screams, and stacked-as-f*ck three-part vocal harmonies, each of Animal Races’ 11 tracks bring the four-piece’s electrifying live performances to life.

'Time Capsule’ is about exactly this, explains Pat T; “when you replay a recorded track, that little chunk of time is brought into the current moment. This is especially true of a recording of a live performance. ‘Time Capsule’ was designed to open the door for improvisation and is the encapsulation of just one version of this song, each version specific to the one time we play it. It’s going to change a lot as we play it over the years.”

For a band who, just like society and the world itself, is constantly evolving, Cool Ghouls are the perfect antidote for San Francisco’s current state of mind, providing the real-life soundtrack whilst not letting the city’s culture be burned to the ground.

“A SF group riding a timewarp, singing about the tech-driven gentrification of their city in the style of their mid-’60s forebears.... Exceptional tunes!” Uncut