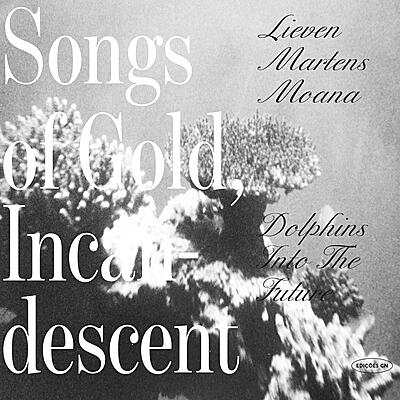 Incl. Instant Download
Preise inkl. 19 % USt, exkl. Versandkosten.
Sendungen außerhalb EU sind 15,96% günstiger.
These are twelve songs, culled from compilations, limited run cassette releases, choreographies, and singles; recorded between 2010 and 2015. Some pieces were worked on for a certain length of time and others materialized in just about one take. All these works are derived by an encounter with an object, a place or a person; or by a combination of these. The events are translated into the work through the intermediary of symbolic sounds and notes. There is no thematic link between the compositions.

Lieven Martens (Lieven Martens Moana, formerly Dolphins Into The Future - 1981 Belgium) is a composer and observer. Through various recording techniques he creates a conceptual form of Programme Music that travels beyond the pure description. His works are narrative stills and personal impressions; encounters with objects and thoughts; equally embracing and denying external theories; using the inconveniences of certain techniques and circumstances as the potential creative force; citing history without trying to be a keeper of the tombs of tradition. Amplified with text and pictures, the exotic viewpoint now and then takes a central position. In various ways this hybrid concept is a conductor for questions, critique, adjustment, or for mere amplification.

Over the past few years he has been performing all over the globe. From Mexico City, to Tokyo, Niigata, Lisbon, Lecce, Honolulu, Brussels, et al.

Between 2009 and 2012 he released several albums under the Dolphins Into The Future moniker on various record labels (Not Not Fun, USA; Fonal, Finland; NNA Tapes, USA; et al). His first LP under his birth name – titled “Music From The Guardhouse” - was produced by KRAAK (Belgium) in 2013. In 2015 he self-published a compilation of outtakes and sketches, produced on various formats (c.q. “Songs Of Gold, Incandescent”). In March 2017, “Idylls” came out on Pacific City Sound Visions (USA) in co-production with his own Edicoes CN. And in October 2017, the prolific EM Records from Japan released “Three Amazonian Essays”, a modern classical reinterpretation of the Spanish cult classic “Amazonia” by Finis Africae. These albums got critical acclaim on many music websites and in many print. New work is coming scheduled for 2019.

Next to these activities, Martens runs a private press on which he releases records and editions; and he has been writing commissioned music for ensemble, submitted music for national radio, for film, and for art exhibitions. Furthermore he’s been presenting his work in the form of lectures at music and art schools. He recently has been collaborating with fellow artists like Francesco Cavaliere, Roman Hiele (as Hiele Martens), Floris Vanhoof, Spencer Clark and Mia Prce (aka Miaux). Martens also hosts a monthly radio show on the internationally acclaimed LYL Radio from Lyon & Paris, France. In 2016 he received a grant from the Flemish Department of Culture.