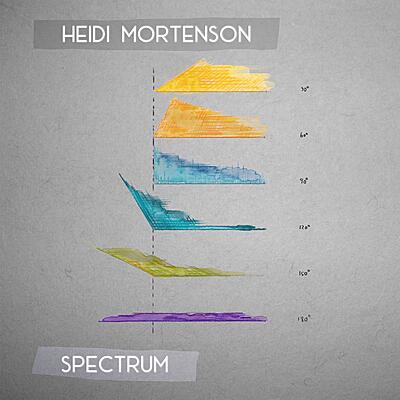 Mortenson’s critically acclaimed 2005 debut album Wired Stuff, released on Mortenson’s own imprint Wired Records, revealed a visionary and bold producer. It offered up deeply queered DIY-pop - synthesized, direct tomboytronica cut with soul-y flourishes, and spell-binding androgyny. But it was 2012’s Mørk EP (“Characterized by it's mature essence and pensive vocals, Mørk is a powerful combination of ferociousness and utmost delicacy.”, AIAIAI) released on RUMP Recordings, where Mortenson, with a fearless dive into the darkness, revealed her ability to combine a new sound of pop-oriented music with blinding native language that led international listeners to their own interpretation by the sheer and unmistaken atmosphere of the music. Spectrum offers up something brighter together with what characterizes Mortenson’s music: emotionally-charged, biographical anthems drawn from lived experiences as a gay, autistic, gender-non-conforming artist. An artist on the spectrum in all regards.

Spectrum was written and produced in Mortenson’s recording studio in the woods over the past four years. It waves like a neon green aurora, lighting up with the tape-delays and spring reverbs that have become Mortenson’s signature, though critics and fans will hear a subtle, ear worm-y shift in style here: from the openhearted and oddly swinging ‘Just A Feeling’ and the slow-dancing-in-the-dark of ‘The Fire That Keeps Me Alive’ and the gloomy yet hopeful ‘Time In Between’, to the substantial, 80s synth-laced ‘Illusion’. The big wondering and philosophical approach to feelings and situations is an ongoing process documented with music.

"Humans come in a wide variety of identities within gender and sexuality, just like people on the autism spectrum have something in common, but yet are very different. That is why it makes sense to talk about a spectrum which offers diversity instead of stereotypes.” Mortenson’s approach is emotion and commitment to detail and how the feeling of a situation translates into sound. Listen closely, for example, to the lyrics on ‘Paradise On Earth’ and you will sense the introvert and reclusive life style in the woods “If I’m the only human left on this planet / I’ll be just fine, it’s OK / Imagination, memories / Will keep me company”. Or take ‘Just A Feeling’ with a lyric reference to Cat Power and Nina Simone “The moon is full / Every night in slow motion / With Chan and Nina / Gently singing to me” stating a blissful solitude. Finding yourself on the spectrum also means getting to know and understand the essence of yourself better, what you saw as a weakness you may start to see as a strength. Take Spectrum’s ending track ‘Bring It On’: “Here comes abundance / Through nature’s gates and high water / I recognise this feeling / Bring it on, I deliver”.

Ultimately, Spectrum is a celebration of liberation, a melodic-filled record that sees Mortenson consolidating spectrum both personal and artistic.