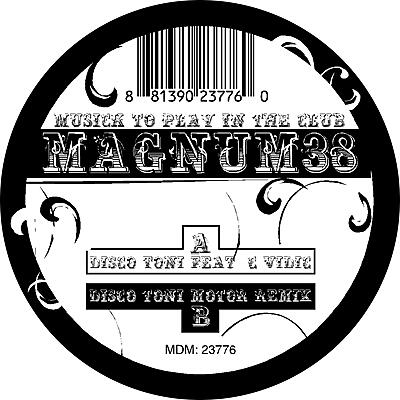 Disco Toni is a handsome guy hanging out too long, too often and too xxx at your local discotheque. A lost super hero of an extreme soap opera of nowadays’ tvmusicfilmyellowpress daily life. Dirty, sexy, extreme, a shining star with the voice of an angel named Corinna Vidic. Magnum 38 wrote a musical portrait of this bright personality. A techno/electro thing that will burn everything and everybody wherever it will be played – no matter if it’s a big rave hall with 4000 people or a drugged out after hour in a small club. With its gnarzy breakbeats and its deepness it’s rave and pop at the same time, but most of all it’s a monster, monster, monster.

Novamute superstars Motor deliver an ass kicking 4 to the floor remix. They seem to be trying to push Toni in a straighter outfit, but that doesn’t really work: Too strong his body, too strange his mind, the 4 to the floor version of Motor stays twisted!

Almost ten years ago after playing in a couple of notorious punk and rock outfits Oliver Greschke decided to exchange his old guitar for a good sound card and to free himself from all the compromising that comes with being just one single piece (however large it may be) in that puzzle called a band or a group. He wanted to be one solid monolith, a weapon on his own and all by himself.
With his mostly breakbeat solo productions under the alias Magnum 38 he has then been part of the Shitkatapult label family right from the start and released two eps and a few compilation contributions on this label and its sub label Musick.

After months of losing himself in experimentalism and reaktor patches, after taking journeys into minimal house and nerdy abstract tracks Oliver Greschke aka Magnum 38 has now finished his first solo album that will be released on Musick in August. Stay tuned!