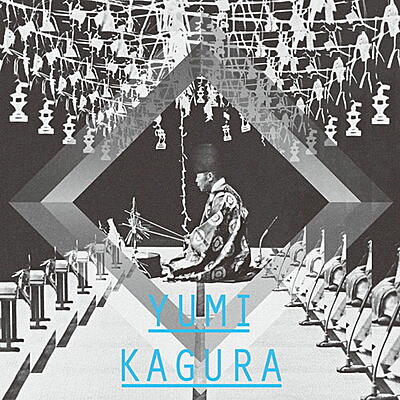 Preise inkl. 19 % USt, exkl. Versandkosten.
Sendungen außerhalb EU sind 15,96% günstiger.
A hotline to the gods! Kagura is a thousand-year-old form of Japanese Shinto sacred music and dance, accompanying the chanting of myths; the word "kagura" can be translated as "god-entertainment". Passed down over countless generations, the music is rare and recordings even rarer. Shigeo Tanaka was a master of the yumi (bow), an uncommon single-string percussion instrument, which is a true bow: arrows are fired off at the end of each ceremony to fend off evil sprits. The instrument is difficult to play; it's hard to draw out the proper sound and maintain the rhythm.

Yumi kagura is the oldest of all the various forms of kagura. The Tanaka family, based in rural Joge-cho, Hiroshima prefecture, has passed down this yumi kagura tradition for hundreds of years; this lineage continues to this day in the person of his daughter Ritsuko Tanaka. The Joge-cho yumi kagura, which prays for family well-being, bountiful crops and good fortune, was designated an Important Intangible Cultural Property in 1971. The piece featured here, "Takusa saimon", based on the myth "Ama no iwato" (The Rocky Celestial Cave), is mesmeric, reaching back across ages to the time before time, with Tanaka's voice and yumi, accompanied by flute and metal percussion, drawing us closer to the primal activities of the gods. Listeners may find affinities with aspects of musics as diverse as German electronic minimalism like E2-E4, certain Ethiopian music, "spiritual jazz" and more, all tapping into the deep root of forever. Previously available only on a ridiculously obscure 1990 cassette release, Yumi kagura is the first collaborative release by EM Records and Riyo Mountains, a Japanese folk song research team.

Available on LP and CD, with the CD featuring a bonus track: "Inagahachiman jinja yumi kagura hono" recorded in 2016 by Tanaka's daughter and successor Ritsuko Tanaka.