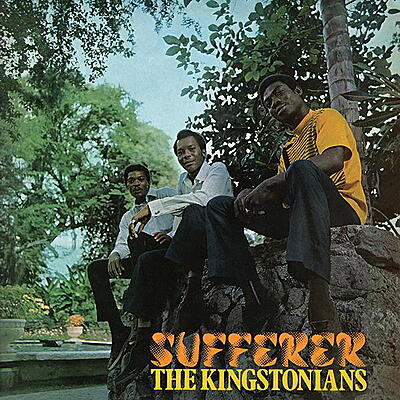 Preise inkl. 19 % USt, exkl. Versandkosten.
Sendungen außerhalb EU sind 15,96% günstiger.
While Montego Bay natives Jackie Bernard, his brother Footy Bernard and cousin Lloyd Kerr recorded under various guises in the early ’60s, their collective arrival as The Kingstonians in 1967 marked a sea change not only in the vocal trio’s productivity and popularity, but also in the emerging Reggae sound. The Kingstonians made several chart-topping singles between 1968 and 1970, including the massive hit “Singer Man” whose success ultimately led to the release of their sole LP, Sufferer.

Originally issued on Trojan, Sufferer collects a dozen of The Kingstonians’ best-known songs. Produced by Derrick Harriott, these truly boss sounds would pack dancehalls on the island as well as become the soundtrack for working-class youth across ’70s Britain.

The title track remains a classic of the early Reggae era with impeccable arrangements, stuttering organ and soul-steeped lyrics. The Kingstonians’ shift away from Rocksteady modes is perhaps most apparent on the aforementioned “Singer Man”—an irresistible forward groove, prompting a deeper danceability that is rightly centered on real feeling.

Reproducing the original sleeve design, this reissue is part of an archival series that focuses on Trojan’s essential ’60s and ’70s catalogue. Liner notes by Laurence Cane-Honeysett.