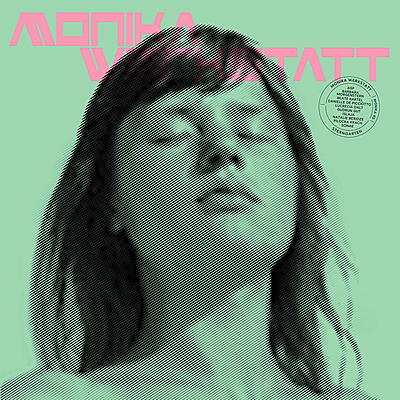 Incl. Instant Download
Preise inkl. 19 % USt, exkl. Versandkosten.
Sendungen außerhalb EU sind 15,96% günstiger.
Are you for real? Does anyone out there really think that artists could be involved in a project that bestows total freedom in 2017? Isn’t today’s reality that society and what is left of creativity are being forced to bow to the pressures of neoliberalism and are being undermined by politicians with their largely awful agendas? Hasn’t creativity been reduced to wages and money versus time and art?

However, it’s too easy to just peek out of our caverns at a world overshadowed by dark clouds and leave it at that. Because at the same time, don’t we still believe that, against all odds, anything is still possible if you’re surrounded by an exemplary group of like-minded people?

Gudrun Gut, the artistic powerhouse behind labels Monika Enterprises and Moabit Musik is a musician with an extraordinary legacy – be it as a member of Berlin’s legendary act Malaria, OceanClub, her acclaimed solo projects or recently a collaboration with Faust’s Hans Joachim Irmler. Gudrun Gut has a proven track record of successfully connecting with like-minded artists on unusual paths of creativity. She´s an outstanding example of someone who refuses to compromise their artistic vision.

And now she is ready to present one of her most ambitious projects ever: Monika Werkstatt – a loose collective of female artists set up to enable each of them to achieve new goals through collaboration. Monika Werkstatt will ensure that their artistic output gains visibility in an art context still too dominated by men.

Monika Werkstatt has its origins in collective workshops and in shared interactions. By sharing their own challenges and achievements later on with an audience, this opened a gateway to a further feedback and creative dialogue. Every moment, every gesture, every communication has been about empowerment, both individually and as a group.

History has a weakness for coincidences, and the release of “Monika Werkstatt” happily falls on the 20th anniversary of Monika Enterprises. A fantastic landmark and a means of celebrating such a tremendously talented collective that Gudrun Gut has orchestrated.

So what is this release really about? Gudrun’s fellow Monika members – AGF, Beate Bartel, Lucrecia Dalt, Danielle De Picciotto, Islaja, Barbara Morgenstern, Sonae, Pilocka Krach – travelled from Berlin and assembled in the creative oasis of Uckermark. The goal was to create and record without any of the usual pressures and distractions that you’d anticipate in a group context. To keep the focus, Mo Loscheider cooked, Manon Pepita assisted with the day to day and Lupe was filming.

Uckermark became a kind of utopia for them. Between recording and jamming, their days were filled with music, eating, short walks in the fields and forests resounding with inspiring talks and discussions. Without any restraint or rules, they opened up new forms of interaction and creative dialogue which found themselves falling into a process without any clear beginnings or ends. The result? Hours and hours of new from this uplifting gathering.

Once the recordings were completed, representatives of the group were delegated roles for a finished production – some sequenced and mixed the recordings into their own tracks, while others built their own from the material recorded. The results succeed in showcasing the community as a group, as well as portraying singular pieces of art derived from a collective process.

From a melange of ambience, improvisation and song we are treated to a double album that features 25 shining stars. Keeping to their motto of total freedom, the range of styles and sounds are very diverse. Some of the contributors prefer to reflect room and space such as like Nathalie Beridze (who was invited as a producer) with “Doodle“ and “Hit Bottom“ or “Feuerland“ by Beate Bartel, others walk on industrial ground like Lucrecia Dalt with „Blindholes“.
Beate Bartels other contribution “M.B.T.” is prime for the club whereas AGF continues to prove herself as one of electronic music’s coolest musicians with “Ninjaness”. Gudrun Gut takes listeners on a magnificent journey into dub with “Repetition”, whereas Danielle De Picciotto delivers mighty sound collages with “Ikarus” and Desert Fruit” – taking a powerful lyrical approach that almost feels that you are listening to the gospel of nature.
And then there is “Between Two Worlds” by Sonae – its hard to believe that its only 4 minutes long as the story one hears appears to be so much longer and bigger. The piece recalls “Blow Up” by Michelangelo Antonioni – an amplified excursion that multiplies the sounds of a meadow. Listeners can pick up on all the noises and scratches that emit from under her feet. A natural drone symphony.
Changing pace for the second half of “Monika Werkstatt”, Pilocka Krach asks a crucial question with “Who’s Afraid Of Justin Bieber?”, right before Islaja starts making mystical gestures with “Sappho’s Gifts”.

Try as you might, you’ll not be able to second guess a moment of „Monika Werkstatt“. By giving everyone, both group and individual, freedom of creativity these musicians have really charted new territory. I would be lying if I said I wasn’t jealous to have not been on Sternhagen Gut while the magic happened.

There is so much more that could be said about the feelings, ideas and stimulations within this inspiring collection but its time for you to take a listen for yourself. These are only my thoughts and they count no more than your own. Working together, we get a bigger understanding of this picture called life. And remember, we all have the right to live according to our dream of total freedom. Life is too short to be told what we should or should not do when it comes to art. Or indeed, anything else.

So, meet the creative collective, and feel the empowerment that goes by the name of Monika Werkstatt!