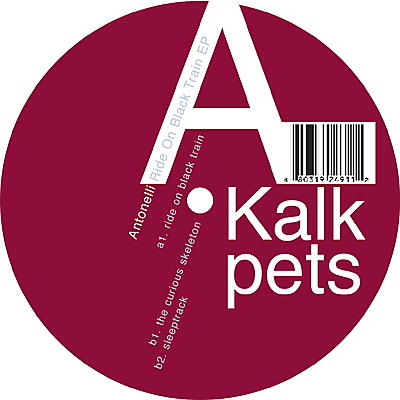 Incl. Instant Download
incl. 19 % VAT, excl.  Shipping
Delivery outside of EU is 15,96% off.
With his second Kalk Pets release Antonelli refines his sound for another couple of revolutions more and such, in the 10th year of his making music, proves once again that the congenial one-man-band is up to continually amaze us over and over again.
Speaking of continuity: one's tempted to construe ride on black train as an invitation and to cheer the hypnotically rolling-rolling-rolling train to pleeeeeease go on and on and on. A bass drum, as tasty as manna but with a slightly dry note to it. Melody-miniatures that you'd wanna spread your bread rolls with thick as thick can. Sounds and soundies to regain your faith - and yeeeeeeaaaaaaah, harmonies!
Meanwhile the track romps through the eight-minute-mark and you wouldn't mind another some stops but then again everything has to end and this spirit-thing, oscillating between alarming and conciliable, makes you quite weak in the knees after all anyway.
So in turn the curious skeleton humbly contains itself and certainly doesn't try to challenge the reverse side's almighty train. And why should it? With its gentle bass drum and the elastic bits of melodies the endearing skeleton stands for itself, tatting with a gentle stoicism and spinning around in osseous circles - a perfect soundtrack for the Augsburger Puppenkiste.
The sleeptrack again should be above all understood as a finger exercise - not least due to its brevity. And considering its curious, feverishly swelling undertone you wouldn't necessarily want the latter to rise and shine...it's flickering, it's pulsing, it's driven - but relax: before it gets uncomfortable it's already over.