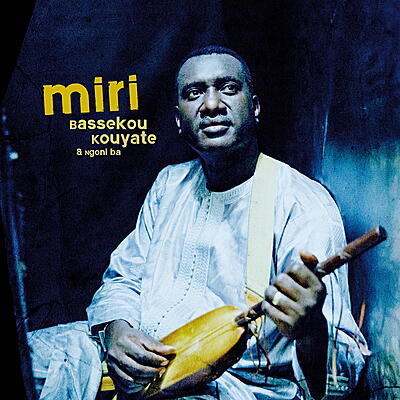 Incl. Instant Download
incl. 19 % VAT, excl.  Shipping
Delivery outside of EU is 15,96% off.
Miri is an album about love, friendship, family and true values in times of crisis. Miri means dream or contemplation in bamana. On Miri Bassekou travels back to his hometown Garana, a small village at the banks of the Niger river. The instrumental song Miri captures that feeling. Bassekou sits at the banks of the Niger far away from the noise, trafficjams and political turmoil of Bamako and thinks about life. Miri is a very personal album. It talks about his mother Yakare that passed away. „When your mother dies“, Bassekous says, „it is like someone tears out the door of your house.“ Yakare gave birth to 13 children of which 5 have died. She was the pillar of the family. Another outstanding track on the album is Deli a song about true friendship, „too many people today sacrifice friendship for money“. Konya talks about jealousy a problem that can even destroy families. One of the most outstanding songs on Miri is: Wele Ni. It takes us deep into the history of Segou koro (old Segou) once home of the Bamana kings. Wele ni is a song about a king who thought he was so great that there was no need to treat the people around him with respect. In the end he has to realize that he is nothing without the people around him. The song is an analogy to today’s Malian society. The 2018 elections showed how deeply Malian society is torn apart by a selfish scramble over the riches of the country. It features the voice of the great Abdoulaye Diabate and Bassekou playing slide ngoni with a bottleneck.

Most guests on the album are mainly longtime collaborators: Abdoulaye Diabate – a legend in the Malian musicscene – headed a band Bassekou used to play in when he still lived in Segou. Bassekous friendship with Habib Koite goes way back to the early days of Symmetric Orchestra. As a trio together with young Toumani Diabate Bassekou played his first concert in Europe in 1989. Now Bassekou and Habib have gotten back together for a touring project. Kanto kelena (she left me alone) is a song about a man who was left alone by his loved one. Afel Bocoum is a longtime collaborator of Ali Farka Toure and comes from the same village Niafunke. On Tabital Pulaaku he sings for peace between the Fula who herd cattle and the local cultivators of Mali, addressing one of the big current political problems in Mali. A very special guest is young Kankou Kouyate, the daughter of Bassekou’s brother Fousseyni who used to play in Ngoni ba. She is one of the most talented young singers in Mali. Kankou can be heard on all of the background vocals.

There are also several international guests who have shared the stage with Bassekou: Majid Bekkas oud and Guimbriplayer from Marocco, with whom he has played numerous concerts as a Trio alongside German jazzpianogiant Joachim Ku¨hn. Michael League known for his band Snarky Puppy and his new project Bokante´ went out of his way to add some guitar to the song Konya. Fiddleplayer Casey Driessen whom Bassekou met while touring with Bela Fleck played on the folkballad Nyame. Dom Flemons from the Carolina Chocolate Drops is a longtime fan from North Carolina. He plays bones on another Bamana classic Fanga. Wele Cuba is a afrocuban jam about Africas love for Cuban music. Cubas answer is sung by Yasel Gonzalez Rivera originally from Guantanamo better known for his reggaeton duo Madera Limpia.

The album pays hommage to two great Malian singers that have blessed quite a number of Bassekous albums: the one and only Zoumana Tereta & the golden voice of Mali Kassemady Diabate. May they rest in peace. They live on in their music.