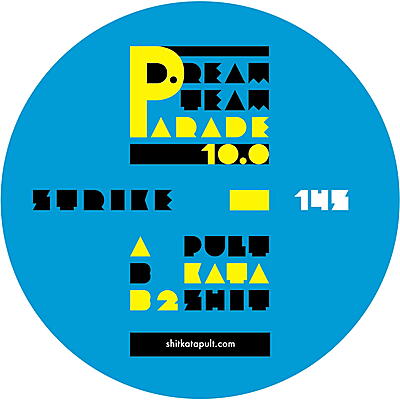 Incl. Instant Download
incl. 19 % VAT, excl.  Shipping
Delivery outside of EU is 15,96% off.
SHITPARADE label owners and best friends DANIEL METEO & T.RAUMSCHMIERE finally teamed up in the studio to bring birth to their first release as dad and dad.
PARADE 10.0 under the moniker D.REAMTEAM was initially planned to celebrate the 10th edition of the annual Berlin club festival by the chaotic label that takes place on the 13th of july, on Dr. Motte ´s original birthday.
Musicwise this 12” kind kicks off surprisingly soft flowing with a 7 minute club trip without any bassdrum. Clack Clack Clack Clack. PULT is waving afterhour dj food for the drug crowd. B side opener KATA can be translated to a reverse varation of the same material but on a fat ass shuffle beat. B side closing tune SHIT could be described as typical rock techno opera a la T.RAUMSCHMIERE but with this METEO touch.