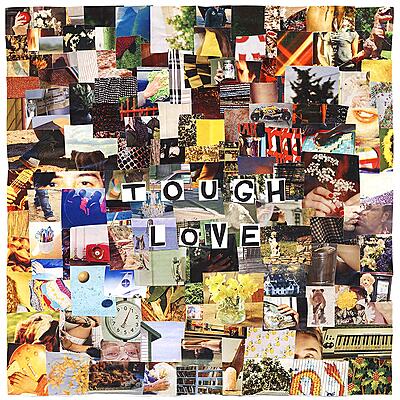 incl. 19 % VAT, excl.  Shipping
Delivery outside of EU is 15,96% off.
The debut album from Erin Anne, Tough Love is an unruly yet elegant collage of all the elements that make up her musical vocabulary: wildly shredded riffs and lo-fi acoustic ramblings, punk-rock energy and folky austerity, new-wave whimsy and high-flown pop theatrics. With a narrative voice at turns thoughtful and rebellious, confrontational and shy, the L.A.-based singer/songwriter presents a body of work that bravely documents the slow and strange process of becoming yourself.

Co-produced with Alex Rogers (Family Hahas, Tambourines), Tough Love offers a potent introduction to Erin’s kaleidoscopic musicality and infinitely unpredictable guitar work. In bringing the album to life, the two collaborators drew from an earlier version of Tough Love self-released by Erin in early 2019, re-recording each song with live drums and Rogers’s lavish collection of analog synths. With Erin playing every instrument except drums, Tough Love bears an expansive sonic palette wholly suited to its emotional thrust—a state of mind she encapsulates as “standing in the doorway between presents you’ve grown out of and futures you’re afraid you’re too small for, and using music as the catalyst to take those steps into the unknown.”

An album charged with restless intensity, Tough Love reaches a glorious peak on its title track, a song initially informed by Erin’s experience in earning her Ph.D. in musicology at UCLA. “Being a woman in academia can be exhausting,” says Erin. “‘Tough Love’ started when I came from a day at seminar when I was trying to make a very simple point and couldn’t get a word out—I was incredibly frustrated, and tried to write a vaguely ’80s, “9 to 5”-style song that would feel good to Jazzercise to.” But as the track took shape, “Tough Love” eventually morphed into a massive anthem, a thrillingly cathartic refusal to let her voice go unheard.

During her undergrad studies at Bowdoin College, Erin experienced a life-changing revelation upon viewing the Kathleen Hanna documentary The Punk Singer for a course on gender, sexuality, and popular music. “I grew up in New Jersey where everybody played lacrosse and I had very limited access to anything remotely queer, which meant I’d never heard of riot grrrl before,” she says. Not long afterward, Erin formed a riot grrrl band named the Navel Gazers, and began performing her own material for the first time. After graduating from Bowdoin, Erin moved to Portland, Maine, where she started a solo project called REGI RKT (a nod to a zine-making, feminist, street-hockey-playing character from the Nickelodeon cartoon “Rocket Power”), then put out an EP titled Vulnrubble in 2017. Her first release under her own name, the original version of Tough Love arrived in June 2019, and soon landed her a deal with Carpark Records.

In releasing her newly reimagined take on Tough Love, in all its frenetic grandeur, Erin hopes that the album might leave her audience with a sense of wholeness similar to what she found in its creation—an adventure she describes as “a journey to becoming a more comfortable self.”