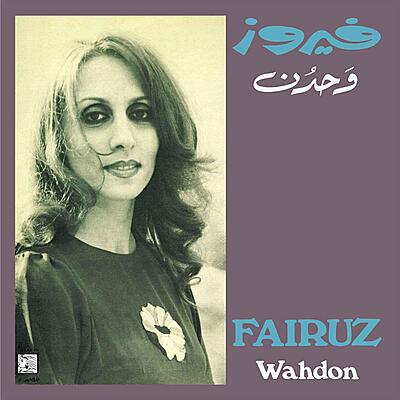 incl. 19 % VAT, excl.  Shipping
Delivery outside of EU is 15,96% off.
The highly sought-after 1978 album by lebanese diva Fairuz produced by her son Ziad Rahbani and featuring the cult arabic groove classic "Al Bostah."

Following the reissue of Ziad Rahbani's "Abu Ali" album, Wewantsounds is pursue its exploration of great Lebanese music with the reissue of "Wahdon," released in 1978 by legendary Middle Eastern diva Fairuz and recorded during the Abu Ali sessions and including the Lebanese dancefloor cult classic “Al Bostah“.

1978 is a turning point for the Lebanese Diva. The 70s had seen her rise as an international star, playing sold out concerts in the US and in Europe, and appearing on national TV in France. She had had a long-lasting artistic collaboration with her husband Assi Rahbani and his brother Elias (aka The Rahbani Brothers) who, together, had penned most of the singer's classics. In 1978, Assi who had suffered a brain haemorrhage in 1972 got weaker and the collaboration finally ended (together with their personal relationship). Their 22 year old son Ziad took over Fairuz's musical reins and set to work on their first album together, "Wahdon" ("Alone"), serving as her mother's producer, composer and musical director.

Wahdon typifies this key moment in Fairuz's career when she switched from traditional to more modern arrangements. The first side of the album encapsulates the more traditional side of the singer with such mesmerising songs as "Habaitak Ta Neseet Al Naoum" ("I loved you so much i forgot to sleep") or "Ana Indi Haneen" ("I'm Nostalgic"), filled with gorgeous arabic strings and percussion.

The Second side though is a whole different affair. Recorded in Athens at the EMI Greece studio at the same time as the Abu Ali sessions, the two long tracks brings a hipper, contemporary funk and disco feel that has made the album such a collector's item with DJs and diggers around the world. Clocking at almost nine minutes "Al Bostah" ("The Bus") tells the story a woman in love remembering a bus journey with her lover under a scorching heat, enhanced by an hypnotic uptempo funkified disco beat, while "Wahdon" brings a slower and jazzier underlay to Fairuz's superb singing. These tracks shocked some of the diva's fans at the time but they've since passed the test of time and have become highly sought after.

Whadon has since become both a classic Fairuz album and a cult Ziad Rahbani production that Wewantsounds is delighted to bring to a wider audience for the first time.