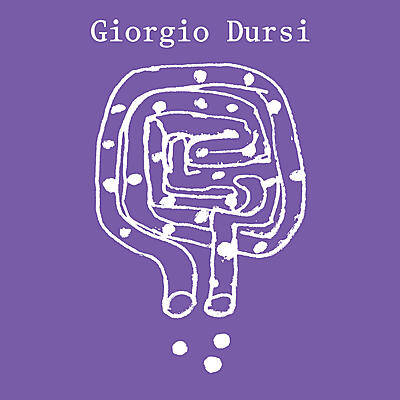 incl. 19 % VAT, excl.  Shipping
Delivery outside of EU is 15,96% off.
Coming from Italy by way of Berlin, Giorgio Dursi has fashioned an artistic practice where the familiarity of commonplace objects and voices fuse and contort into completely unexpected avenues of sound experience. In Intestinocephalo, his first release on Kraak, monologues languish into states of dormancy like an episode of intentional catathrenia and then expand, evolve and, finally, disengage. In order to project this tension within the amorphous, Dursi deploys electronics, horns, small instruments, vocals and, crucially, silence, constructing layers of free-flowing soundscapes and uncanny drones imbued with a growing sentience of their own.

"At the end of 2018 I entered a period of deep introspection due to several factors. On my desk there were texts on neuroscience, linguistics and music related to brain studies, evolutionary biology. I was also working with the manipulation of mental images translated into images of words which were subsequently manipulated and emitted through voice. It is a very simple process. Through exercising this process I was physically feeling the brain in movement, the chemical process of the creation and transformation of the mental images and the connection with the voice and the external environment. So I had this fixed idea of this organ that absorbs material from the outside environment, metabolizes it and then throws it out modified, through a hole. There’s where I had the feeling of a brain that is also an intestine and vice versa. A dualism of the rational high mind and the scatologic amorphous secretion. These are intuitions that I had for a long time, and are as old as human beings, but at that point it was something I was physically feeling and needed to confront and elaborate." -Giorgio Dursi