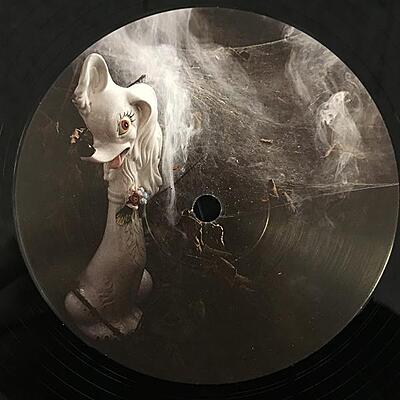 incl. 19 % VAT, excl.  Shipping
Delivery outside of EU is 15,96% off.
Blind-siding EP of devil-mix atmospherics and shapeshifting, fractural sound design - the latest offering from Heith (Haunter Records ++) and the first release on his new outlet - SAUCERS.
For all its psychic, slow-burning umami, “Mud” floats with an urgency that’s almost impossible to place - the raw, dry-ice rudeness of some Reinforced synth sweeps playing 800% slower than intended, fused and tightened with the immersive, sci-fi wonder of Dopplereffekt’s “Calabi Yau Space”. Heith utilises this deadly sound palette and moves with an unbeknown stealth and liquid agility that generates some sorta demented sense of adrenalin (and that’s just the intro!).

“Extra Melma” sounds like it could have been recorded in a magma chamber deep in the earth’s core - waves of THICK molten chords drift across most of Side A, slowly diffusing like a lava flow gradually rolling into the ocean, intermittently disrupted by swiftly evaporating fissures of digitally distorted sub-bass. Totally addictive this one - teaming with the forward leaning phuturistix you need to feel like you are actually living in 2019, without getting too, ya know, Matrix: Reloaded.

On the other side, a booming, steadily paced stepper - “Yoga Of Stealth” comes primed with apathetic synth sweeps that vaguely recall JTG’s “Angela” from last year, further extraterrestrial club tension forged by cyclic string samples folding in on themselves. It’s the perfect lead-up to the clattering, dislocated grime swordplay of “?” - it’s shattered, naked-flame melody revolving on and on until Heith closes with a deep, aching cut of computer-soul - the vocals on “Mud Queen” singing an untranslatable romance of two distant planets. Edition of 300.