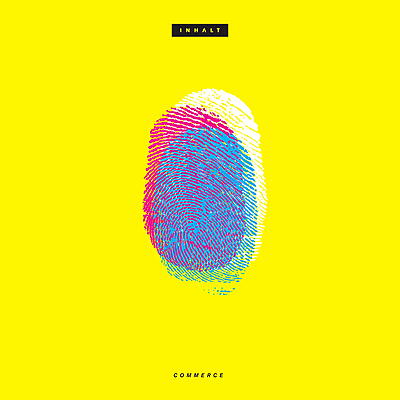 incl. 19 % VAT, excl.  Shipping
Delivery outside of EU is 15,96% off.
Dark Entries releases 'Commerce', the third EP from San Francisco-based trio INHALT, German for “content”. The group was founded in 2009, and for the purposes of this recording are Matia Simovich, Philip Winiger and Steven Campodonico. INHALT’s core operative strategy is of sonic fidelity and integrity rather than nostalgia. Their first release was a split 12" on World Unknown in 2011 followed by two EPs on Dark Entries, a remix EP on Emotional Especial and a Part Time Punks Session on Cleopatra.

‘Commerce’ is a close examination of the self destructive tendency of the ego in relation to the allure of negativity and mass tragedy. The EP details the psychopathy of relentless thirst mandated by neo-liberalism and traverses through the adoption of social and economic technologies that strengthen domination vis a vis self enslavement to disempowerment. Employing the best of both modern and vintage techniques, the four songs on the EP utilize dense production, big snares, and powerful German vocals from Philip. INHALT are informed by the brooding soundtracks of John Carpenter as much as the vastness and sheen of Trevor Horn, and set out to explore the borders between the vocal-driven pop song and the expansive dancefloor 12? arrangement.

The record was produced over four years at the bands own Black Sun Loft recording studio and Different Fur Studios. Paul Lavigne mastered the EP in London, England at Kontrast Mastering and George Horn handled the vinyl EQ curve at Fantasy Studios, Berkeley. Each EP is housed in a specially designed jacket by Leo Merz and includes a lyric sheet with English translations.