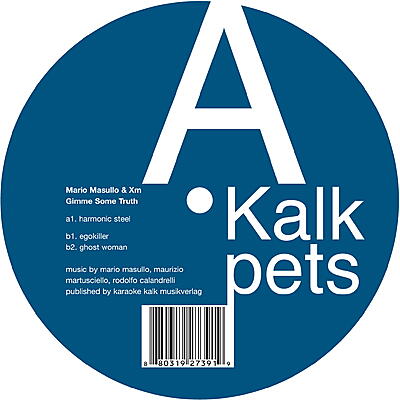 Incl. Instant Download
incl. 19 % VAT, excl.  Shipping
Delivery outside of EU is 15,96% off.
As a cofounder of the italian label defrag Mario Masullo is contributing a good deal to the progression of electronic music in Italy. The label's various releases by artists like Glitches, Thomas Jirku or Anders Ilar have in common the same clear and minimal language.
Besides various projects as a musician and producer, amongst them collaborations with Gez Varley, he is now releasing a 12" under the name of MARIO MASULLO & XM on the befriended label Kalk Pets. XM being Maurizio Martusciello, one of the pioneering key figures within Italy's electronic scene.
For this release Masullo has put aside his familiar minimal sound and devoted himself to the cheery, more technoid realms of electronic dance music.