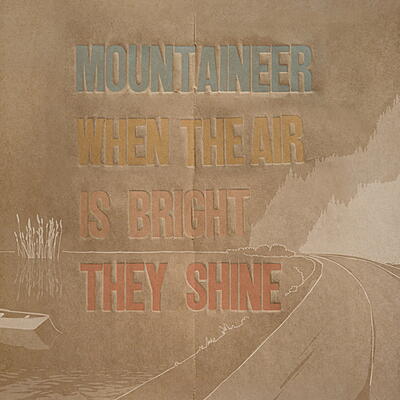 Incl. Instant Download
incl. 19 % VAT, excl.  Shipping
Delivery outside of EU is 15,96% off.
...incredibly complicated and strong...remarkably different... - Cornell Daily Sun
"A great pop album with elements of folk and bossa nova and no dull moments." - Soundscaping
"The air is warm, and Mountaineer shines brightly." - XLR8R
5* A perfect escape from the daily routine - De:Bug
"...late summer music at its best." - Music For Robots
Mountaineer started out life as the project of German singer and songwriter Henning Wandhoff but soon after the release of his first album "Sunny Day" he began to itch for collaborators, especially in taking his epic songs into the live environment. After a few years and a few lineup changes he was eventually left with the crack team of Katja Raine, Fiona Mckenzie, Anna Bertermann and Alexander Rischer and he could begin work on his third album.
Wandhoff had a specific goal in mind as he pieced together the initial skeletons of "When the Air is Bright They Shine"; he was listening to the classic LPs of the late 60s and 70s; 35-40 minutes, 10 tracks, every track perfectly realised and the album holding together without filler. There were none of those modern devices used to trick people into thinking they have got something a little more worthy than it really is just pure pop music. He wanted to re-create this, but not make something knowingly retro, instead to put together his album with the same sort of high bar of quality control, to put together 10 songs that embodied the philosophies of those classic albums without actually mimicking them. After two years of work Wandhoff finally succeeded and had moulded the tracks into leftfield pop gems, raking in influence from decades of essential music.
The album opens with "A Town Called Ivanhoe" and we´re already on the right path - the track has the best elements of Jim O´Rourke, Kings of Convenience or Jose Gonzalez, but manage to inject it´s own special Bossa charm which carries across the whole album. Imagine driving along a beach on the West Coast of the USA as the sun is setting and you´ll have some idea of the rich moods captured on this ten track disc. When we reach "Eliza (A Day For Every Hour)" it´s clear Wandhoff has a deft skill in pop songwriting this is a track that wouldn´t sound out of place on any self-respecting radio show, but what´s more it´s actually credible too. As Wandhoff´s soft vocals trip and tread over brushed drums and slide guitar it´s simply impossible not to fall in love with the music.
In cynical times like these it has never been more appropriate to deliver an honest album of great music, music that makes you feel good to be alive. "When The Air Is Bright They Shine" is exactly that, and it´s unforgettable sun-drenched moods will take you all the way to paradise and back again.

Mountaineer: When The Air Is Bright They Shine