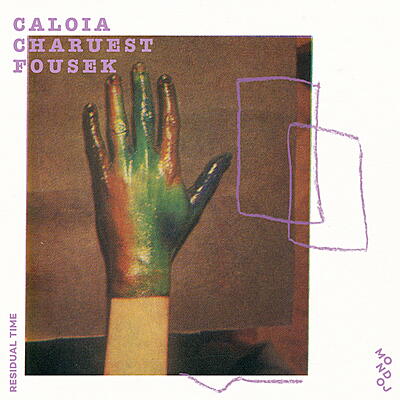 Incl. Instant Download
incl. 19 % VAT, excl.  Shipping
Delivery outside of EU is 15,96% off.
Formed in 2016, the Canadian trio of Nicolas Caloia (double bass), Yves Charuest (alto saxophone) and Karl Fousek (analog synthesizer) are exploring new potential in textured collective improvisation. The project combines Caloia and Charuest’s ecstatic acoustic instrumentation with Fousek’s stark analog synthesis, conjuring unpredictable interactions that touch upon as much melodic cadence and consonance as they do irregularity and silence. Residual Time comprises a single live take recorded in Montréal in 2016, showing the trio quickly hitting upon a raw group discourse greater than the sum of its parts.

Double bassist Nicolas Caloia has been making music in Montréal since the 1990s, playing extensively as a part of the local scene and playing with the likes of Marshall Allen, John Butcher, Joe McPhee, and Steve Lacy. Currently he’s a member of various ensembles, including In the Sea with Tristan Honsinger and Josh Zubot. Saxophonist Yves Charuest has a no-less impressive resumé, having played extensively since the 1980s, including stints with the Peter Kowald Trio, plus performances with William Parker, Nate Wooley, Roscoe Mitchell and Steve Noble to name a few. Karl Fousek has also garnered a stellar reputation in recent years, right at the forefront of fervent new explorations into synthesis. Largely utilising potent modular synthesis and custom-built software, Fousek has taken his music into a variety of contexts, garnering a vast array of releases and collaborative projects with Roger Tellier-Craig, Devon Hansen, Danny Clay, and more.

The one-shot live recording on Residual Time is a snapshot of a trio at the beginning of a journey right into the unknown. Traditional syntaxes of free improvisation already begin to disintegrate over a breezy half hour. Fousek brings striking alien synth noises directly into the organic field of acoustic improvisation, Caloia and Charuest quickly replying with compelling imitations. When it comes to the sonic reinventions and mutations of Caloia / Charuest / Fousek, this is only the beginning.