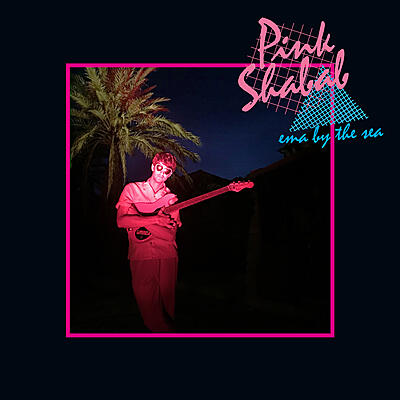 Incl. Instant Download
incl. 19 % VAT, excl.  Shipping
Delivery outside of EU is 15,96% off.
»Ema by the Sea« is Joseph Carvell’s debut album under his Pink Shabab moniker. It is the first and long overdue solo record by one of the most trusted bassists in the world of adventurous pop and rock music. When he is not playing with Marker Starling, the former Batsch member can be heard on upright and double bass on a slew of Baby Dee albums like her 2012 collaboration LP with Little Annie or Laetitia Sadier’s »Find Me Finding You« amongst others. When Carvell is not busy as an active member of the cumbia band Malphino and the Moondog tribute I’m This I’m That or playing improvised jazz with various friends, he writes Pink Shabab songs at night. With »Ema by the Sea,« he presents his idiosyncratic approach to subtle disco music for the first time. These nine songs sound as heartbroken as they are uplifting.

»Ema by the Sea« was written in a South London bedroom, but recorded in Southern France. After hearing Carvell perform live as Pink Shabab, Emmanuel Mario, whose album »L'infini, L'Univers Et Les Mondes« under his Astrobal moniker has been released earlier this year on the Berlin-based Karaoke Kalk, invited the British songwriter into his home studio. It is easy to see - or rather: hear - why the two hit it off immediately: drawing on funk, soul, new wave, jazz and dance music, Carvell’s songs meander as effortlessly through different musical worlds as Mario’s own productions. Groovy and laid-back, danceable and intimate, the minimalist structures of Carvell’s songwriting open up a lot of space and make room for plenty of surprises along the way.

Carvell builds his songs around his instrument of choice, the bass. From the driving opener »If Only I Could Hold You One More Time« to the disco and funk influenced »Let Me Explain,« »Tried to Tell You« or »Last of the Boys« and the sombre rhythms of the final song »You Can’t Go Back,« his cunning playing seamlessly oscillates between different styles. In combination with his almost coy singing style and the juxtaposition of an airtight drum programming with colourful synthesizer melodies, »Ema by the Sea« thus provides a wide-ranging palette of moods - spooky, lively, cosmic, romantic, you name it. Where in one moment pensive sentimentality prevails, the next song will call you to the dancefloor. Although of course enjoyed as a whole, »Ema by the Sea« offers both: melancholy and exuberant bliss.

Pink Shabab: Ema By The Sea