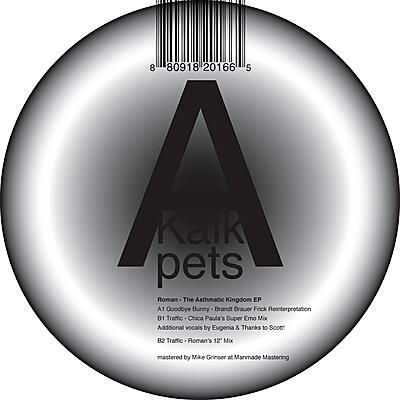 incl. 19 % VAT, excl.  Shipping
Delivery outside of EU is 15,96% off.
Following the release of his recent eponymously titled full length album on Karaoke Kalk last year the Berlin based imprint's dancefloor orientated sublabel Kalk Pets now brings you Roman's latest remix EP, The Asthmatic Kingdom.
The record kicks off with the Brandt Brauer Frick reinterpretation of Goodbye Bunny. A fitting point of departure for the 12" as the ensemble's Paul Frick was himself the subject of the last single on Kalk Pets. This is a cutup jazzy number with all the elements one might expect from the accoustic-techno trio.
The cement holding together the triptych of tracks on The Asthmatic Kingdom is provided by Chica Paula's super emo remix of Traffic. Known as half of Chica & The Folder together with Max Loderbauer on Monika Enterprise or in her own right as a DJ and producer, Paula's use of pitched and sampled vocals makes for a moody transitory track, ideal for crossovers.
And this fine EP come to a close with another exclusive 12mix of Traffic. Roman's original lyrics hold the focus on this version making for a more pop climax to this powerful EP.
Once again Kalk Pets have delivered a prime cut in the form of The Asthmatic Kingdom EP.