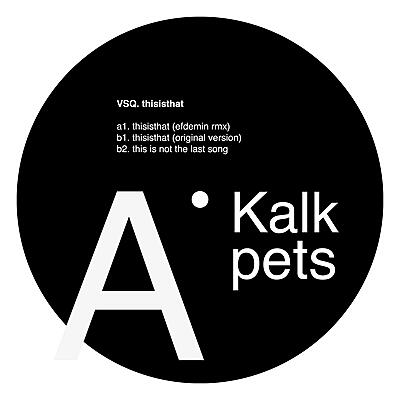 incl. 19 % VAT, excl.  Shipping
Delivery outside of EU is 15,96% off.
Here we go again: Karaoke Kalk is releasing Kalk Pets 19 - VSQ.
Behind the mysterious initials is Hanno Leichtmann a.k.a. Static. He has already released a number of 12"s as VSQ, formally known as Vulva String Quartett, on his Düsseldorf-based label Combination Records as well as contributed a fine remix of Daniel Meteo's "Jack's Daniel Remxes" to the Kalk Pets series.
Leichtmann has already released an album on Karaoke Kalk in 2006: "Nuit Du Plomb". A wonderful ambient album following a dramatic reading of Hans Henny Jahnn's novella "The Night of Lead" ("Die Nacht aus Blei").
Whatever name he might use: Leichtmann stands for musical innovation on the far side of 4/4 mainstream. Kalk Pets now presents you with two new tracks of marvellous quality. A remix by Efdemin accomplishes this splendid 12". So klingt Musik.