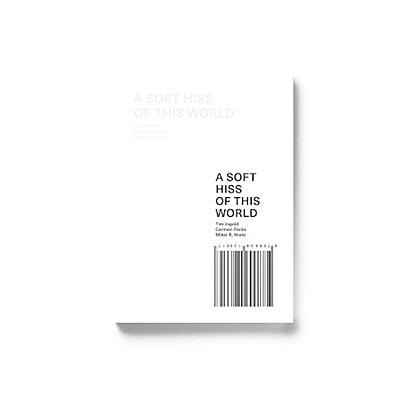 incl. 7 % VAT, excl.  Shipping
Delivery outside of EU is 15,96% off.
The research project “A soft hiss of this world” is focused on the loss in many aspects such as the loss of language as a result of the Anthropocene through the absence of certain states and processes that occur naturally in the environment like different states of water, snow and ice. In Finnish there are more than forty terms* to refer to them and because of the loss of these states in the landscape, the loss is also displaced to the language, in this case, the Finnish. This research project took these words as a starting point to make hundreds of hours of recordings in the Finnish landscape. The sound of snow, ice and snowflakes are the reference and the sound material of this research project. And to obtain these sounds, as well as the possible sound differences between each snowflake, special and specific microphones were developed for this very specific and fragile recording process.

Is it possible to record the impossible or what does not exist? There are three types of impossibility in each recording: the recording of a sound event due to its absence, its extinction or the impossibility of recording itself. The condition of possibility for the absence is the presence itself. It is known that in the Arctic, people can see and hear things that are impossible in other places on the planet. These phenomena are caused by special atmospheric conditions and some people in these latitudes have described some sounds that happened at great distances or sounds of extreme delicateness. How much of the landscape resides in our listening?

In 1985 Joseph Scrimger wanted to calculate the noise generated by rain, hail and snow underwater (Nature 318, 647). Scrimger found an unexpected constant sound during snowfall, but failed to identify its origin. Years later, Lawrence Crum of the University of Washington (Seattle, USA) when listening to these recordings suggested that in this constant sound there were a lot of micro-sounds that corresponded to the tapping of the individual flakes on the surface of the water.

This book contains texts by three authors: Tim Ingold, Carmen Pardo and Mikel R. Nieto, on the research carried out by Nieto in Finland during 2016.

The text by Tim Ingold opens the book and introduces the reader to the main subjects of the research: language, landscape, sound and listening. This text is easy to read and aims to immerse us in the Finnish landscape and in the listening act to its sounds and silences. Carmen Pardo‘s text unfolds first, the way in which the gaze and listening of the snow constitute the experience of a disappearance, of a concentration in the void or nothingness of which A Soft Hiss of this World participates. Secondly, and in dialogue with Roland Barthes, the kind of listening involved in recording different states of snow is questioned. From that listening, the text proposes in the third place, the exercise of recording as an experience that implies a multiple temporality that reminds us that, in fact, it is always habited in a heterogeneity of times. The third text belongs to Mikel R. Nieto and is divided into four parts. The first part called “This is nothing” contains Nieto’s texts and thoughts about the most important points of the investigation, such as silence, listening, landscape, language, disappearance and absence, archive, hyperojects and the anthropocene. The second part is a “Diaries (2009 – 2019)” which brings together a selection of photographs and the most outstanding moments throughout the research in a brief direct and poetic format marking the corresponding places and dates. The third part is a code that reflects the loss of most of the sound recordings made during his research with more than 600 hours of recordings. This code is the only thing that could be recovered from all recordings, except the only sound recording published in physical format as a transparent Flexi-disc.