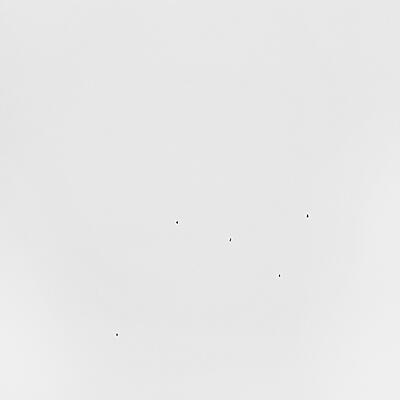 incl. 19 % VAT, excl.  Shipping
Delivery outside of EU is 15,96% off.
Every recording project explores a gap that exists between uncertainty and realisation. It can be a treacherous zone of investigation, one that can frustrate as easily as it can reward. In this expanse of possibility, artists and musicians traverse a particular set of variables within which the potentials for their chosen work are realised.

When Australia artist Todd Anderson-Kunert, commenced work on his debut edition for Room40, Conjectures, he was intent on approaching this zone of entanglement with equal doses of curiosity and strategy. Undertaking a residency at Melbourne Electronic Sound Studio, which is run by Room40 comrade Robin Fox and artist Byron Scullin, Anderson-Kunert began trawling through the vast array of synthesisers within the facility.

After some time, he began to realise the answer to the creation of Conjectures did not lie in some survey of modern electronics, but rather an interrogation of one machine. With this strategy in grasp, he sat at their Moog System 55 Synthesizer, one of only a few existing in the world and set about creating a delicate but richly timbral album of reductive electronics.


From Todd
I feel I don’t know much, it’s not that i feel stupid, but often I feel like I’m trying to engage with the world while simultaneously trying to understand it. It’s a gap in some form of knowledge I’ve learnt to appreciate, a contemplation of details and how they relate, but where many are still unknown. When trying to translate this feeling into linear form, the word Conjecture feels appropriate, mainly due to a complimentary duality of meaning.

There is the ‘formation of conclusions based on incomplete evidence’, and so there is a form of understanding and comprehension without knowing. However there was also what was referred to as an ‘obsolete’ use, which was the interpretation of occult signs. And so here there is a similar type of guesswork happening, however the material that is being considered could be described as ephemeral, experiential, or maybe at times non-tangible. The details I’m trying to correlate aren’t always hard scientific facts. They can be thoughts, feelings, impulses or superstitions.

The album formed a rumination about engaging with this experience, and in that elements of confidence, doubt, mystery, connection and quite literally the unknown, not as abstraction but as an actual thing, an entity. Sonically it uses only electronic sounds in order to interrogate frequency, dynamics, and timbre, being influenced by genres of Noise, Modern Classical, Ambient and varieties of Electronic experimentation. Recordings that were close to me during this period include works by Eliane Radigue, Sarah Davachi, Pan Sonic, Stephen O’Malley, Okkyung Lee and The Haters.

I still feel that I don’t know much, but I wouldn’t have it any other way.