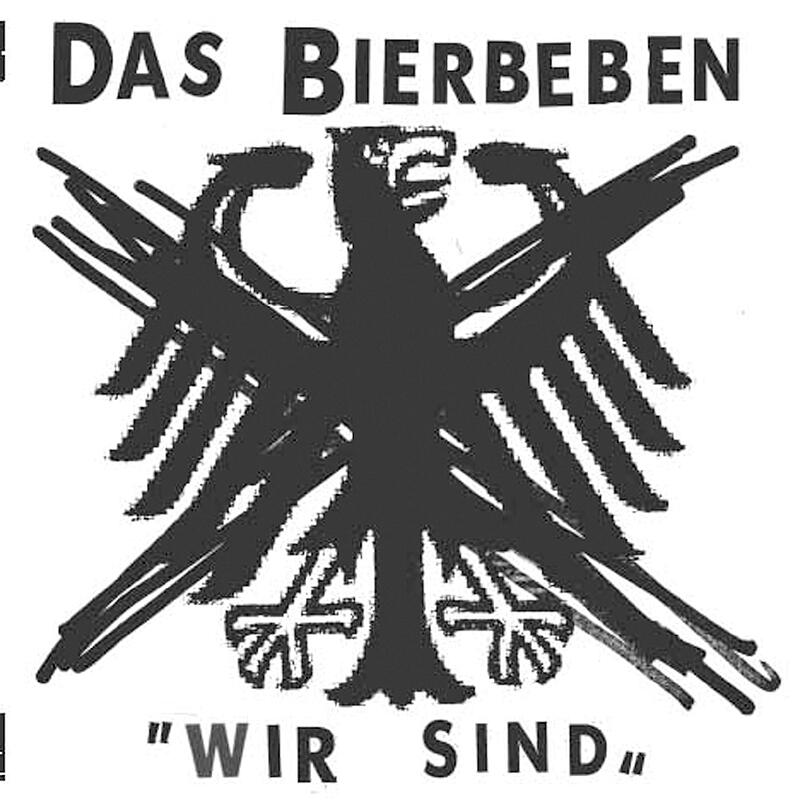 Noticeable belches of alcohol drenched truths are brought to the forefront with a beer-belly that’s as fat as the notion that everything used to be better. Das Bierbeben will destroy clubs. It was only last year when these recess rockers from Hamburg’s schoolyards recorded their debut „Die Birne ist reif“ on a tape deck in a rock-o-tronic wreck room with egg costumes and scorched rugs. These alcoholics from 2000 Hamburg/W.Germany decided that it’s too hard to drink with an instrument in your hand. So instead they diverted into digital desktop production with a Karlsquell spring water in one and a mouse in the other. It’s clear that Shitkatapult has snagged three songs for a 12“ release which will almost immediately earn the respect of the directionless masses, late-punks, and post-ravers.
Here we go with the funky aerobics for released reservists of the highest rank who fuse bodily conditioning with mental fixation. This happens before any visit is possible to the Portugese street cafes of your given breakfast hood. „Wir sind und wir bleiben die Unreparierten“ merges two girls‘ silver voices with the unparticipatory tone of an automated subway intercom to the point where all waiting passengers are dancing in synch with the chorus line. „Sturm brich los“ comes as an electro-shock and whoever dared go near the EBM-niche of the early 90s will hear alarm bells ringing. Yup, it’s all about a hi-tech cover version of the equally titled Tommi Stumpff piece from a 1991 LP „Trivial Shock,“ which the former musician actually sees as his worst record. „Gnadenlos“ is yet another Stumpff text from the year 1989 which has breaking relevance in context with the forever-current 80s hype. „Verkauf dich so schamlos wie noch nie“ could be referencing the inflation-like relaunches of past heroes and anti-heroes inscenated as a self-ironic typical German synth-pop-dance-floor-smash-hit. No surprise then that the members of Das Bierbeben disclose their true identities behind alcohol drenched pseudonymns. Stumppff, who’s been dismissed as a violent x-musician while currently working as the IT-manager -- all after having started Germany’s first real punk band „Der KFC“ in the 70s, would most likely pull out his brass knuckles if he heard the hype. It is a fact that he’s pulled out of the music biz and moved happily into the new economy as a business man. „I don’t miss a thing. I am very pleased with my current Dasein. I have a company and am a successful entrepeneur. I also quit because I wanted to save myself and others the embarrassment of standing onstage as an old man trying to present something relevant in our age group. I am 43 years-old, weigh 90 kilos, and this is the full story without a doubt. I don’t chase any past phantoms but am rather content and happy as I am. My goal already 10 years ago was to age with integrity. One also becomes calmer with age. This is a normal biological process. I am tired of being enraged. Instead, I’d rather earn a lot of dough and drink good Bordeaux. It’s up to the 20 year-olds today to raise hell. I wish them all the luck along the way.“ With that said: Sturm, brich los!