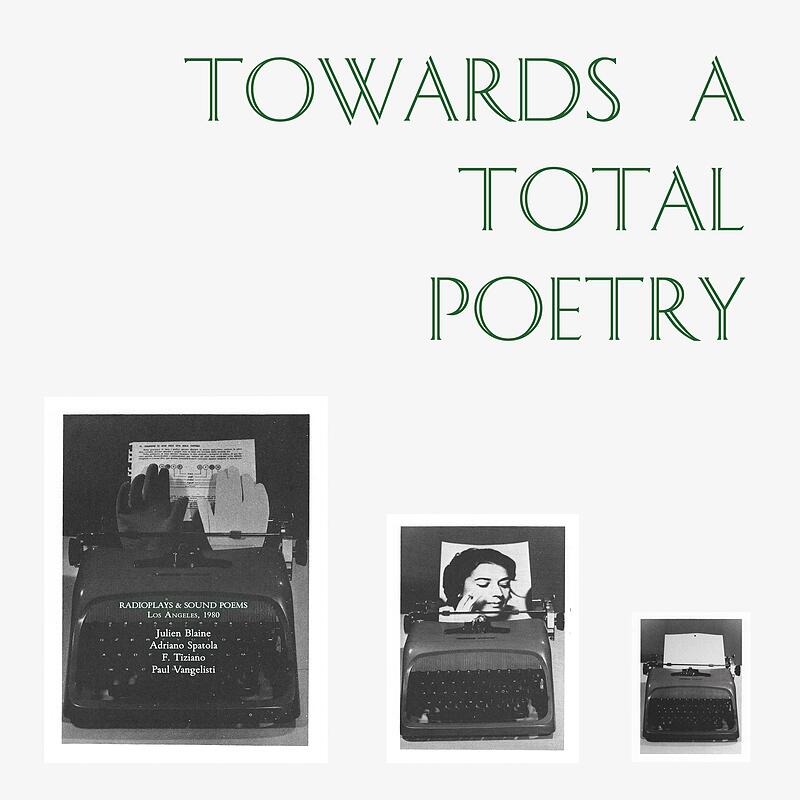 Culled from live performances in Los Angeles in 1980, Towards A Total Poetry holds radioplays and sound poems by Julien Blaine, Adriano Spatola, F. Tiziano, and Paul Vangelisti. Two concerts were organized by poet and professor Vangelisti and broadcast on his KPFK radio show. A rare gathering of extreme French and Italian sound poets in California, flown out on with an arts funding grant (my, how things have changed!). A jarred specimen on a golden platter of a time passed.

The electricity of the performances is unparalleled. Sadistically funny, dizzy with confusion: a map lies dissected on the table. Adriano Spatola (1941-1988) is the most beautiful Italian post-war poet, also publisher of Baobab, Tam Tam, Geiger editions. His stage presence is that of a drunken wolverine, thrashing his words and letters, madly chuckling and whispering secrets to himself. Spatola interprets a disfigured rendition of “Buddenbrooks,” a traumatic and shocking radioplay, held alongside his infamous “Aviation / Aviateur” and “Al Capone Poem,” read with explosive tension. His younger brother, F. Tiziano, is a more mysterious figure. His radioplay, “Los Angeles Bridge,” has four characters: North, South, East, and West. Quibbling through a fever dream over a card game. Professional voice actors were hired for all of the radioplays, translated from Italian by Vangelisti (as with all of Spatola’s English publications). French artist and sound poet Julien Blaine (1942) composed the play “Passe / Futur” – utilizing his actors as verbal instruments: buzzing and howling as carefully as dots on sheet-music. His sound poems are hilarious, “Amputation” mimics the sound of four severing surgeries, and “Mots d’enfants” still confuses me as to what exactly is going on… Paul Vangelisti’s works open and close Towards A Total Poetry. The Los Angeles poet and publisher of Red Hill Press organized the affair and was able to hold his own against such powerful artists. Paul’s pieces are conceptual, opening with a fitting typewriter hymn, “Radio,” and concluding with “Auld Lang Syne,” the Ms of the phone book sung by chorus.

These are some of the strangest radioplays in existence. A format I feel is underused. The infusion of drama and comedy and open air to fill... oh, the possibilities.

Limited LP Edition of 250 copies, 12-page booklet with essays and poems by the artists.