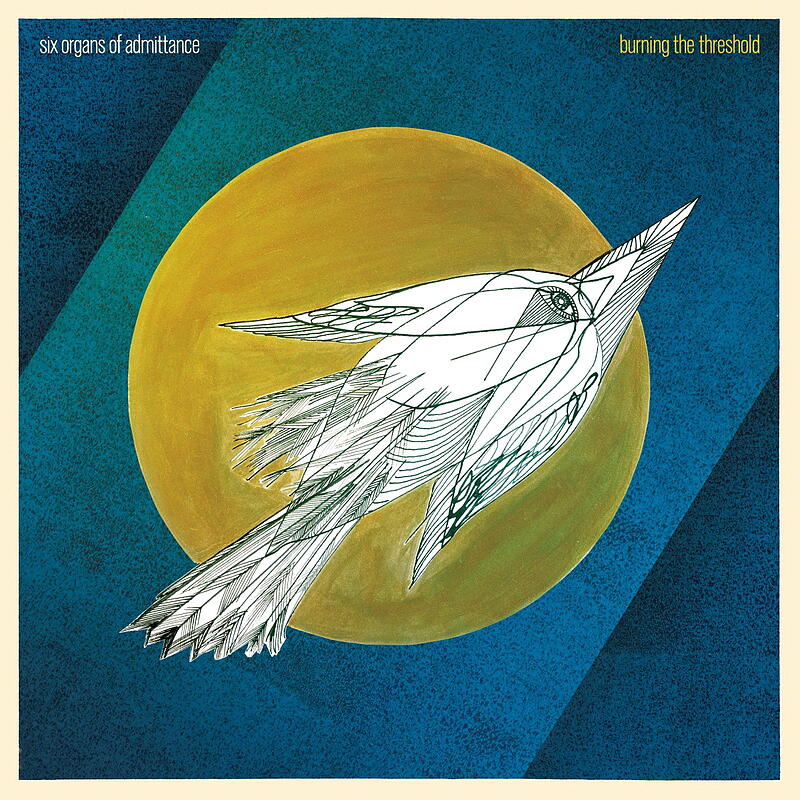 The gentleness found here provides much of what we need for the way forward: love, forgiveness, reality and an ever-wider view, with the understanding of our circular path in life. A powerful draught of musical essence.

In preparing for the first album of non-Hexadic Six Organs of Admittance music since 2012's Ascent, Ben Chasny had a think about what he’d be saying in his own tongue for the first time in a half-decade. As ever, a head-full of ideas were driving him to think and speak music as a spirituality superimposed onto a reality, with the ghosts of both whispering at each other. In the end, what sits in our listening ears is the sound of communion. Burning the Threshold brings a wealth of Six Organs-styled lightness into one of his sweetest musical meditations yet.

Ben is in a particularly expansive mood this time around, singing and playing while thinking of birds in the morning, anarchy, Third Ear Band, Gaston Bachelard, The Gnostics, Ronnie Lane and/or The Faces, Deleuze, Aaron Cheak, Odysseus, This Heat, Takoma Records, St Eustace, Dark Noontide and a HELL of a lot more than that, with all the thoughts affixed to a quiver of potent melodies launching forth and arcing out through dimensions, seeking infinite space.

The space radiates out from the album’s first moment, with “Things As They Are,” a song examining the life of poet Wallace Stevens. Ben’s currently working on music for a theatrical work about Stevens’ life set to debut in Cleveland later in 2017. The empathetic waves generated by this song resonate throughout the album, giving a new dimension to the music of Six Organs of Admittance.

Like so many other Six Organs records, Burning the Threshold was created mostly solo, but features the singing talents of Alex Nielsen, Haley Fohr and Damon and Naomi, the drumming of Chris Corsano, a guitar duet with Ryley Walker, and keys and mixing from Cooper Crain. With this new music, Ben Chasny has created a potent tonic for our times. The gentleness found here, balanced on top of his classical asceticism, provides much of what we need in 2017 and beyond: love, forgiveness, reality and an ever-wider view, with the understanding of our circular path in this lifetime. Looking at the world through clear eyes beneath a knitted brow, but with a laugh rising up from its heart, Burning the Threshold brings us a powerful draught of essence.