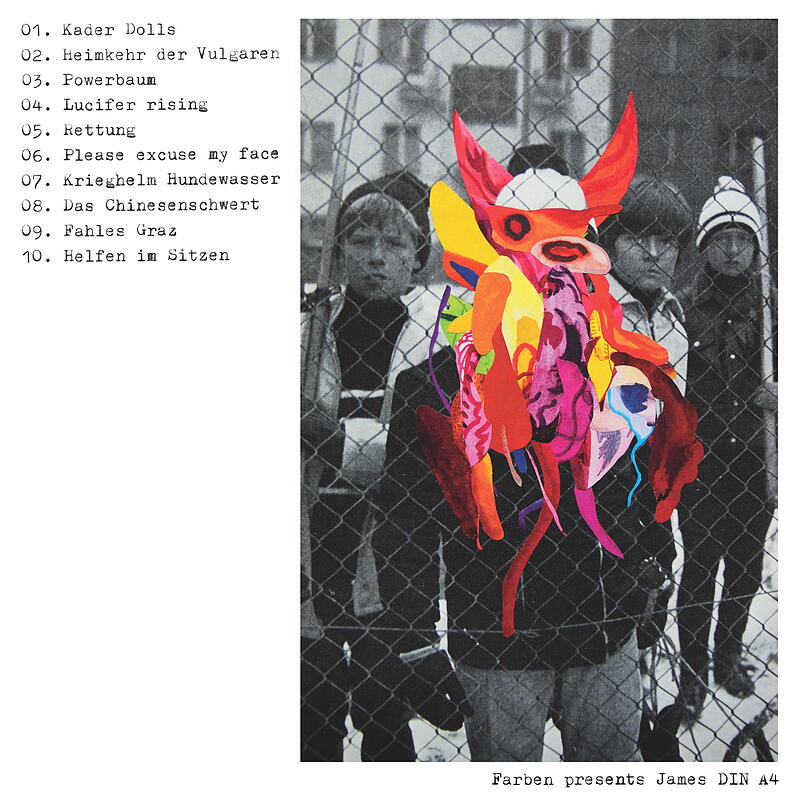 Faitiche is very pleased to present a new album (faitiche12) and, at the same time, a well-known name: Farben presents James DIN A4. In the summer of 2013 Farben (Jan Jelinek) remixed his way through the extensive oeuvre of the sample and collage artist James DIN A4 (Dennis Busch) – and gathered ten of his favorite titles here.

Find out more in the following interview:

Jan Jelinek: Dennis, you’re a musician and an artist who creates audio and visual collages, as well as designing fashion. Could it be said that the principle of collage is what underlies all of your activities?

Dennis Busch: Yes, that’s the common thread running throughout my output. I shake the kaleidoscope and don’t know what the result will be. If I don’t like it, I keep shaking – until some sensible nonsense appears. For me, it’s important to extract the moment of "transformation”. The intuition of becoming and the crystalline structure in being, the beauty in the beast with its head in the clouds, the Great Pyramids of Giza in its hands - to assemble and fasten all this together, that’s what I’m aiming for.

JJ: Staying with your music for the moment, your tracks meander from position to position, and have the effect of seeming to lack concentration – in a positive sense. What’s interesting is that in nearly every track there is one constant: a straight beat. Is this comparable to the white sheet of standard DIN A4 paper on which the collage snippets are spread out?

DB: Four-four time is a kind of diametrical baton. It creates structure and acts as a kind of hostel warden to keep the pubescent samples in line. This is important in order to conjure up a fitting little dress for the playful bumblebees and weeds that are the samples. In fact, a track may sometimes present itself as slightly unfocused, but only under the fullest concentration and dedication. A track that starts off as a swimwear vendor at the North Pole may indeed fade away as a gravedigger at the end of an exploding rainbow.

JJ: Fittingly, your releases on your own ESEL label have been under a myriad of pseudonyms: James DIN A4, Pastor Fitzner, Joyride, Krieghelm Hundewasser, Lassie & Chris and Pop Dylan. How does it work with the various identities, do you create the artist name first and then the music to go with it?

DB: There is something like a typical James DIN A4 cosmos. Anyone familiar with my productions and the various pseudonyms eventually sees through the game. The pseudonym is planned in advance. Not in the sense of reinvention, but perhaps more in the sense of a consequential development. There was a time during which I would have a new album ready about every four months – so it was necessary not to release them all as James DIN A4.

I’m mainly concerned with creating my own universe, a meta-locality, a significant outer space, free of any cartography. Because I live with my family in the countryside near wherever, more or less in the suburbs of nowhere. A toast to life behind the moon!

JJ: You have also compiled a beautiful illustrated book, „The Age of Collage – Contemporary Collage in Modern Art“ (Die Gestalten Verlag). The collage artists that you’ve included all work exclusively with physical materials – paper, photos, and magazines. Why no purely digital works?

DB: I am not against the digitalization of visions, however the focus of The Age of Collage is on manually made collages. There’s a hype around the handmade. This corresponds to the idea of wanting to position oneself – without the help of electronic tools – as the body's own instrument. It's all about "seeing" and "feeling" of apparent contexts and linking paradoxes in the sense of a surreal "self- finding" in the limitlessly playable cosmos, where the artist, equipped with scissors, scalpel and glue, mutates into the body's own astronaut and leaves the past, present and future behind in order to force open a loophole through space and time.

JJ: Which brings us to your own collages. Can you say something about how you work?

DB: With my own collage work I begin with an intention – a feeling that comes over me. I don’t think too much about it but let myself be gently overwhelmed by the pictures. Like solving a mathematical equation, I try to redeploy the different positions of the individual fragments and eventually place them in a new order. I want to work with the consciousness of irresponsibility, letting go of something that cannot be released, and holding on to something that flows away like quicksand in the ephemeral hands of time.