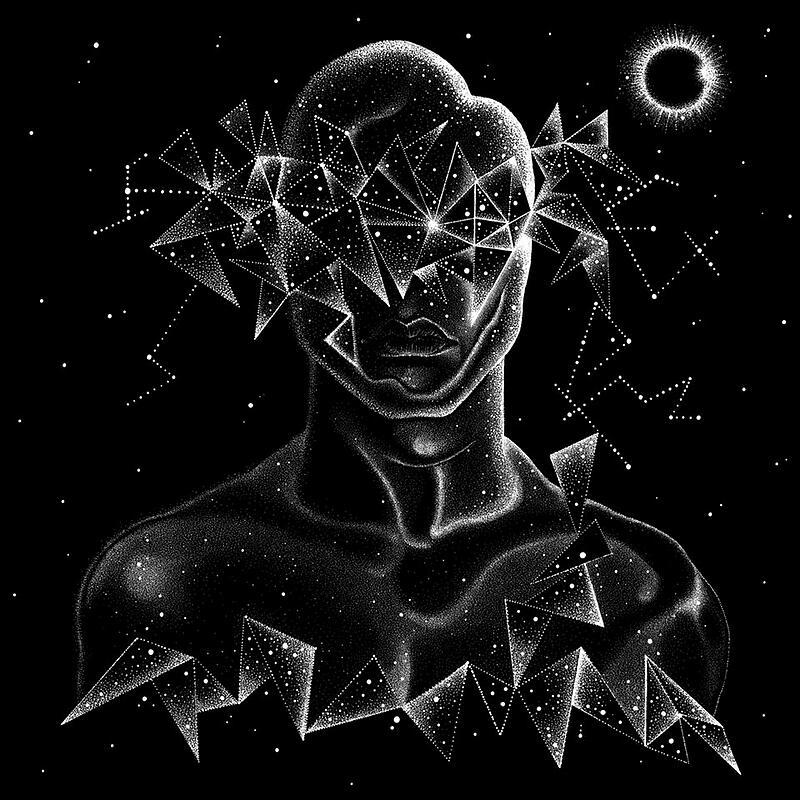 …speaking of air and darkness, Born on a Gangster Star came into the world in a big damn hurry, like nightfall on an island. You can see it happening, but then again it’s so gradual that the next thing you know—it’s dark.

Imbued with the energy and ideas from all the creative embers floating in the atmosphere like fireflies, Shabazz Palaces recorded this entire album over the course of two weeks with Blood in Seattle. New gear and new equipment disintegrated comfort zones into dust and a new path appeared in the rubble.

Herein the Palaceer continues the tale of Quazars, a sentient being from somewhere else, an observer sent here to Amurderca to chronicle and explore as a musical emissary. What he finds in our world is a cutthroat place, a landscape where someone like him could never quite feel comfortable amidst all the brutality and alternative facts and death masquerading as connectivity.

Inspired by days on end spent in the waves—water and light, both—of Southern California, the work came to the Palaceer in a flash, like being picked up by something and carried. Always dribbling with his head up, he can see what’s going on around him and react to it, rather than starting in a certain direction and hoping to achieve something upon arrival.

What’s good?—the kids ask. What does it even mean, and what does it even matter? Who is behind these choices? We are all of us sitting under a waterfall of all. this. shit. But it’s the excess that is casting us into ruts.

The Palaceer stays away from the fleeting and the superficial nonessential. Stay away from your device—your phantom limb—and stay away from your image—your phantom self; that is his decree. Considering the motions behind the things you like to consume artistically, rather than just the way something looks or sounds, and thinking in layers, and trying to be more considerate and not so self-oriented—this is his medicine for combat.

Born on a Gangster Star flirts with a pop sensibility, but through the prism of Shabazz Palaces’s fire and fury. For the Palaceer, that sense is all about how the groove is moving, and the supernatural telepathy that occurs amongst his cohort. Appearing here, in body or in spirit, are Julian Casablancas, Thundercat, Darrius Willrich, Gamble and Huff, Loud Eyes Lou, Thaddillac, Ahmir, Jon Kirby, Sunny Levine, and Blood. The story belongs to Quazarz, but the air and darkness belong to us.

And so we shine a light on the fake.