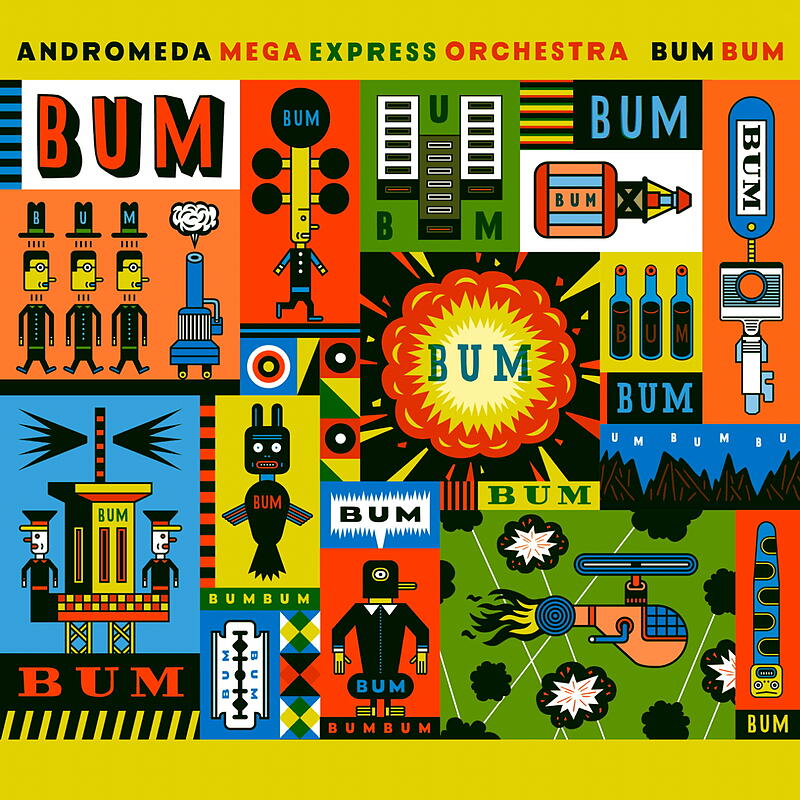 Double-LP in a deluxe Gatefold Cover. Limited to 500 copies only! In May 2009, the 18-piece Andromeda Mega Express Orchestra, conducted by Berlin composer Daniel Glatzel, released their amazing first album “Take Off!” a crazy white-water rafting tour through all genres and styles imaginable, from minimalism to film scores, and from jazz to modern classical music and beyond. Clever, full of sly musical references and quotations, it couldn’t be beaten for pace and wit. Or so we thought. Now Glatzel and his orchestra are back for a second instalment that leaves us breathless with its incredible richness. “BUM BUM” is not predictable for a single second, adding darker tones and atmospheres to the orchestra’s boundless musical pedigree. AMEO might be fun but they are far from easy listening. Glatzel is not fainthearted and no music is untouchable for him, Using his knowledge about modern pop, muzak, baroque composition, gamelan music and the Second Viennese School he sends both orchestra and audience on a journey through time. “Take off!” was recorded live by the whole orchestra, but “BUM BUM” was created in the studio. Almost every instrument was recorded separately, each track was edited and re-arranged by computer. This method of producing is common for pop music, but not for jazz or modern classical. The orchestra is dismantled and reassembled in a new way which would simply not be possible live. Complexity is not an end in itself, though. Compositions and arrangements have a kind of casual sovereignty. Glatzel and his orchestra seem to be in love with every form of music - swing, Schönberg in his romantic phase, jazz from the Fifties, soundtracks, radio jingles... this list could probably go on forever. Wicked humour and deadly seriousness are two sides of the same coin. This is post-ironic world-jazz. A musical cabaret, in which everything can be marvelled or laughed at, depending on perspective and context. Glatzel bombards us with an astonishing range of musical influences. However, this doesn’t make the audience feel helpless, but instead abandon themselves completely. Just give yourself up to fate and scream as the roller coaster is set in motion. As soon as we are seized by a groove, a succesion of notes, a harmony, a voice from a completely different world of sound throws us off track and the mood changes as the orchestra spirals to heady heights. Pleasure is gained by sensory overload. Compositional concepts interrupt each other, cut in, drown each other out. Soundtracks of imaginary American gangster movies are replaced by fizzing harp-arpeggios, then by the clatter of a Big Band jazz band. Nothing is ever what it seems. At least that’s what we think.