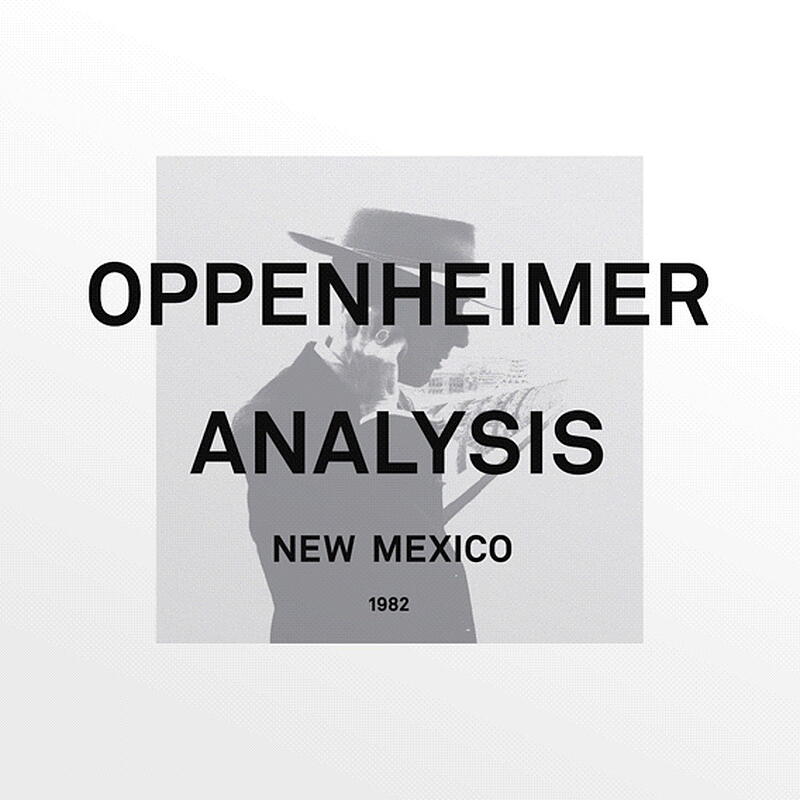 Oppenheimer Analysis formed in London, England in 1982 by Andy Oppenheimer and Martin Lloyd. Their first meeting though was at the 1979 World Science Fiction Convention in Brighton. They quickly became good friends, sharing an interest in the work of David Bowie, electronic music and early synthesizer bands such as the Human League and Soft Cell. They also shared a love of old science fiction movies, 1950s graphics and comic book imagery and a fascination with post-World War II propaganda, the politics and aesthetics of the Cold War, and the social impact of the atomic bomb. Over the next few years Andy and Martin frequented the growing club scene, including Studio 21 on Oxford Street, and became involved in the developing Futurist and New Romantic style sub-cultures. During this period Martin recorded as Analysis, both alone and with David Rome of Drinking Electricity. They released their first single, “Surface Tension/Connections” on David’s Survival label in 1981.

In 1982, Oppenheimer Analysis began writing and recording together at Feedback Studio in Battersea, and performed several times at The Bell, Islington, the 1983 World David Bowie Convention in Hammersmith, the Starzone Birthday Party at Camden Palace, the 1984 European Science Fiction Convention in Brighton and other live venues. Their first demo tape and twelve song “New Mexico” cassette were sold at gigs and by mail-order, and were reviewed in Melody Maker, Sounds and Soundmaker. For the years to follow, Oppenheimer Analysis became recognized among electro-music aficionados as a pioneering duo who influenced countless other bands during the club and home-recording era of the early 1980s and beyond. Their cassettes became massively collectible. In 2005 they re-formed with the release of a self-titled four song 12” EP of selections from the New Mexico cassette, including “Cold War” and “The Devil’s Dancers”. This marked the first release on Minimal Wave.

Now in 2015, we’re happy to present the entire New Mexico collection, newly remastered and cut to vinyl for the first time ever, to celebrate our 10 year anniversary. This first edition of 1000 copies is pressed on deluxe ‘nuclear’ style black and white 160 gram vinyl, housed in a glossy gatefold silver and black printed sleeve, featuring all the song lyrics on the inside of the sleeve. This quintessential reissue has been produced in loving memory of Martin Lloyd.