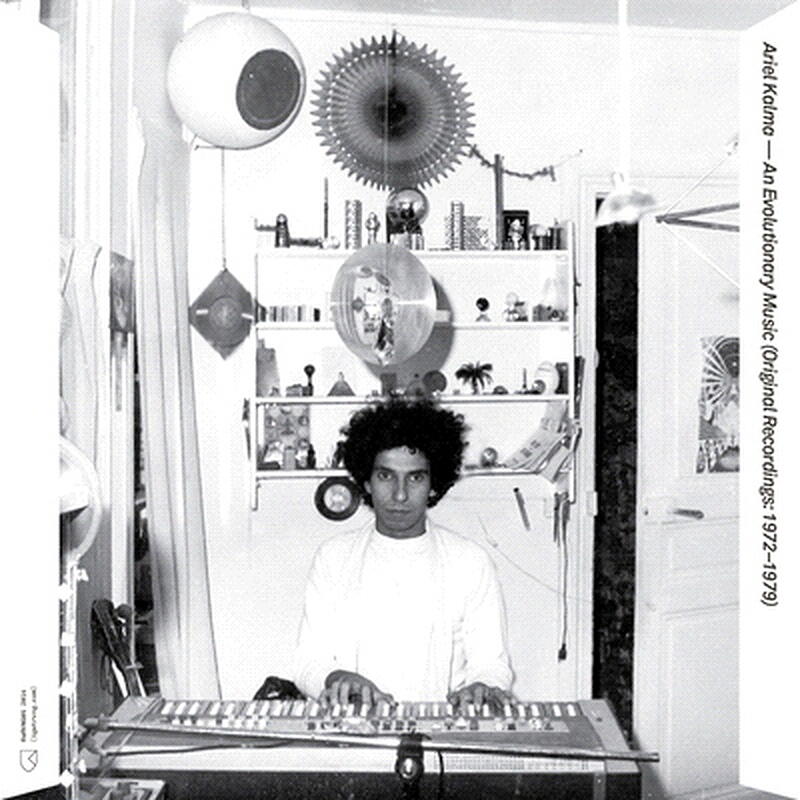 An Evolutionary Music (Original Recordings: 1972 - 1979) compiles unreleased recordings from the archives of multiversal artist Ariel Kalma. Concerned as much with musicality as spiritual facility, Kalma's work vibrates aside fellow travelers along the great rainbow in curved air of the 1970s avant-garde.

Ariel Kalma's boundary-blurring electronic music is heard here in radiant detail across a selection of work spanning his early free-jazz and spoken word trips to his infinite modular synthesizer and analogue rhythm machine meditations. Kalma's story is one of world travel, musical discovery and ego-abandonment. Yet for an artist who often discarded public recognition in favor of the ascetic truths in music making, An Evolutionary Music offers the imprint of an outright auteur.

Born in France, but rarely in one place for long, Ariel Kalma's 1970s migrations took flight through the decade's furthest spaces of musical and spiritual invention. As a hired horn for well-known French groups, the young musician toured as far as India in 1972, a place where Kalma found an antidote to rock n' roll's glitz and glamour in sacred music traditions. Kalma would later return to India and learn circular breathing techniques enabling him to sustain notes without pause against tape-looping harmonies configured through his homemade effects units.

In France during the mid-1970s, Kalma was staffed as a technician at Pierre Henry's legendary Institut National Audiovisuel, Groupe de Recherches Musicales (INA GRM) studios ? the same music concréte laboratory that spawned masterpieces by members Luc Ferrari, Iannis Xenakis, and Bernard Parmegiani. Like his predecessors and colleagues at INA GRM, Kalma's relationship to sound was both formal and non-hierarchical. To Kalma, all music existed as universal patterns, in perfect harmony with the people, places and environments it was created. Kalma's recorded output of the 1970s culminated in the now scarcely-available Les Temps des Moissons (trans. The Time of Harvest) in 1975 and Osmose in 1978, a masterpiece of birdsong exploration. Osmose is double album featuring sculptor Richard Tinti, who had supplied Kalma with hours of field recordings from the rainforests of Borneo. With somber organ textures and wistful sax blended seamlessly into the wild of the forest sounds, Osmose avoids simple soundscaping through Kalma's careful arrangements, allowing each life form its own harmonic gravity.

The backdrop of An Evolutionary Music depicts Kalma's adventures as a world traveller on the cosmic path of inner discovery and musical innovation. Coinciding with United States' bicentennial in 1976, Kalma made his way to New York to join the exclusive musical-spiritual collective Arica, and ended up crashing in the Cathedral of Saint John the Divine's basement. At night, Ariel played the church's organ and ventured out to mix it up with like-minded musicians in the Village. It was here that he met a musical hero, Don Cherry, an artist of much consequence and similarity to Kalma.

An Evolutionary Music harvests uncatalogued music made between Kalma's private press records and onward through the many small-batch cassette releases Kalma would tender. With this collection of musical hybridity and distinct genre-corrosion, Ariel Kalma's righteous bucking of both popular music trends and the academic tenets of the avant-garde falls squarely in the spirit of other renegades of sacred new-music such as Terry Riley, La Monte Young, and Charlemagne Palestine.