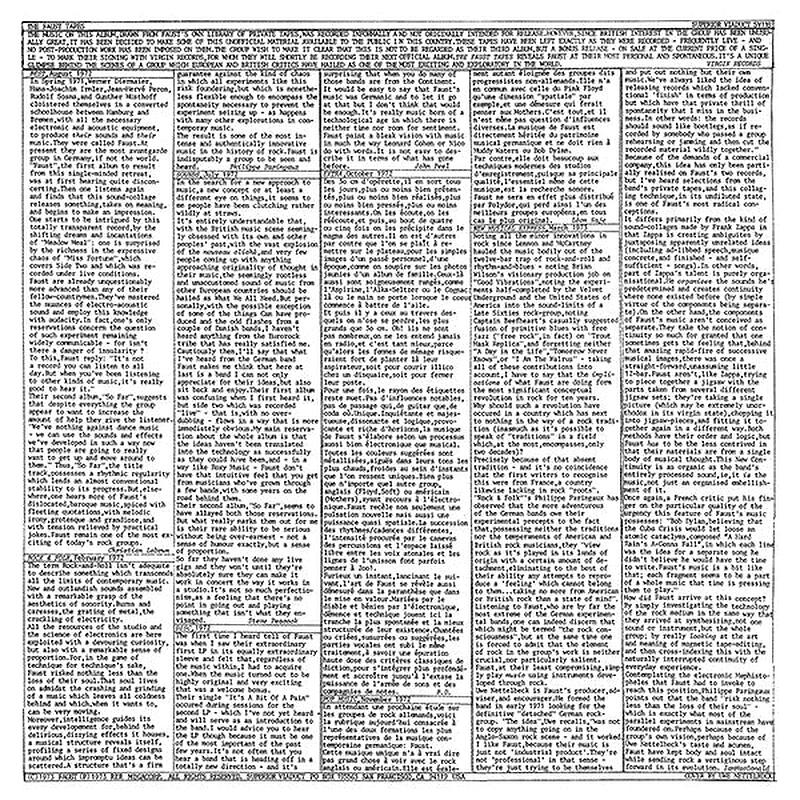 Faust stand among the most influential creative forces to have emerged from Germany in the late '60s and early '70s. Along with Can, Agitation Free, Neu! and others, Faust rejected the Anglo-American norms of rock 'n' roll to start a back-to-basics and uniquely Teutonic revolution in sound – later dubbed by the UK press with the semi-derogatory term "krautrock." Faust would reach near-mythical status through a series of classic albums recorded between 1970 and 1973 at their secluded Wümme studio.

As Dave Segal writes in the liner notes, "There's no consensus about which Faust album represents their zenith. But a survey of the group's fans would likely find the collage-heavy messterpiece The Faust Tapes triumphing. Its freewheeling, jump-cut nature and unlikely earworm moments conspire for more what-the-fuck epiphanies per minute than just about any other record about which Krautrocksampler author Julian Cope has raved."

Comprised of twenty odd tape-manipulation experiments and freak-out jams, The Faust Tapes stashes away some of the band's best-known songs. "Flashback Caruso," with its delicate acoustic guitar and Rudolf Sosna's airy vocals, could easily have appeared on So Far or Faust IV, while on "J'ai Mal Aux Dents," Jean-Hervé Peron's playful lyrics and this ecstatic, era-defining riff perfectly represent Faust's magical mischievousness.

This first-time domestic release of The Faust Tapes on vinyl reproduces the original sleeve design, featuring artwork by Bridget Riley.