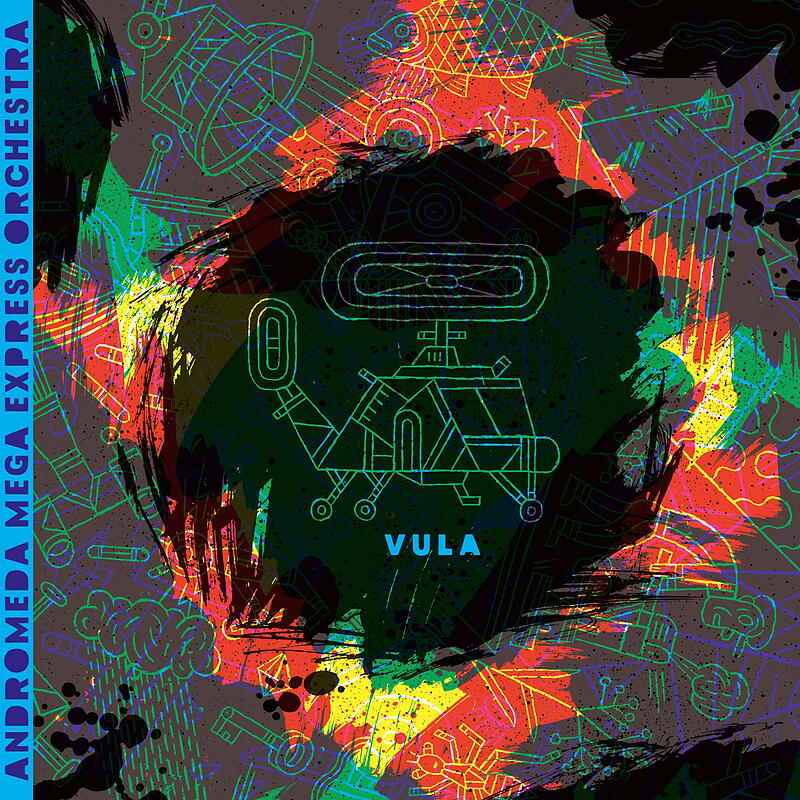 Berlin’s Andromeda Mega Express Orchestra returns with its fourth album “Vula”. Having celebrated their 10-year anniversary with a stunning series of concerts last year, the 18-piece’s new full-length showcases a stronger focus on harmony and melody – and yet AMEO sound no less explosive or unpredictable than before.

It arrives gently, with shimmering lights, soft winds, sashaying melodies, and of course, the isotherms and isotheres function just as they should: All of a sudden, lighting strikes amid the concord of instruments, unforeseen energies erupt and upset the rhythmic scenery with elemental force. Making a combined effort to create sheltering patches of harmony within the unfolding drama, leader Daniel Glatzel and his 18-piece “working band” set out to harness album #4: “Vula” is out 09/07/ 2017 via Alien Transistor/Morr Music.

Another musical tour de force that connects too many dots, decades, traditions and genres to mention, “Vula” is quite a different beast compared to its live predecessor or the orchestra’s last studio effort “Bum Bum” (2012): There’s bigger, bolder strokes, and the compositions are linked by recurring motifs and harmonies, which is why the new LP sounds like one entity: It is ONE hour-long adventure that needs to be listened to in full. “Listeners who just dip in and out won’t be able to grasp it, I’m afraid,” says Glatzel. “It takes concentrated listening from beginning to end with good sound to feel it out. It might sound somewhat anachronistic, but it actually reflects the working process, because there were so many hindrances and obstacles we had to overcome during the five years in which we worked on ‘Vula’. And yet, despite all the hullaballoo I felt inspired to see it through: the music seems to tell us ‘if you can’t devote yourself to this, you’re lost; but if you can, you’re bound to experience this ride fully.’

A musical deluge of incredible breadth and depth, the title “Vula,” taken from the Tumbuka language (spoken in the northern region of Malawi), indeed translates to tempest or thunderstorm: “Compared to what we get in Germany, rainstorms in Malawi are actually a lot heavier – they really shake your senses,” says Glatzel, a frequent visitor of the area. “The storms in Malawi are announced by playful winds that arrive in the sweltering heat, and the giant clouds soon erupt into downpours that can last hours. The sky is utterly black, as the loud rain keeps hitting the earth incessantly. Plus, there’s the loud cracks of thunder, of course...”

Ranging from softly trickling melodies (“Lakta Makta Ha”) and hazy interludes, the mood, vibe, and pace change faster than cloud formations come flying across the screens nowadays (e.g. “qwetoipntv vjadfklvjieop” with its arrangement à la Helmut Lachenmann). In fact, even the flight of swallows is often misleading: head-nod bliss, motion picture soundtrack vibes, and even J.B. licks aren’t mutually exclusive in these compositions, as AMEO showcase with “J Schleia,” a track that nods both to Dilla/Grandmaster Flash and to Bach-era counterpoint techniques. Elsewhere, a pounding surf-rock beat metamorphoses over the course of 14 minutes (“In Light Of Turmoil”), only to see them return to patches that are surprisingly catchy and calm. The final applause turns out just as thunderous though, after the album ends with the vibrant and colorfully orchestrated “Papaya Flyers IX Epsylon,” a live recording that already foreshadows the group’s later collaboration with Hermeto Pascoal.

A work that’s “born out of turbulent times – both internally and externally,” Glatzel says that AMEO’s fourth album is “generally driven by an urgent search for some kind of truth, a feeling that pushes its way through countless layers.” In fact, one can actually hear that the entire process, from writing to intricate post-production, took almost five years: “The album’s somewhat vintage, almost dreamlike and unrealistic sound is due to the fact that a full year lies between recording and mixing”, Glatzel explains. “It resembles the feeling of looking back and experiencing the past all over again. There was an element of detachment, but at the same time I was able to see things in a clearer light.” And it’s true: These puddles, rippled and ripped open by an onslaught of raindrops, do look even more magical in that sepia-hued light.

A self-organized, independent group of likeminded individuals, AMEO is unlike any other orchestra: It’s a steadily working ensemble with a steady focus on experimentation. Comprised of 18 young, in-demand musicians hailing from various countries and musical backgrounds, its members have previously worked in constellations that couldn’t be more diverse – including Ensemble Intercontemporain, Tony Allen’s Afrobeat, Jazz-Legend Kenny Wheeler, Camerata Bern, The Notwist and post-conceptual artist Cory Arcangel. Daniel Glatzel, the orchestra’s leader and saxophonist, has been the main composer over the last decade since it's inception in 2006, overseeing the groups three previous releases “Live on Planet Earth” (2014), “Bum Bum” (2012) and “Take Off” (2009).
Besides playing concerts in internationally renown venues around the world, AMEO also hosts and curates its own genre-defying events such as their music festival “Kosmostage”, concert series and special projects with artists like Hermeto Pascoal from Brazil, tribal musicians from Malawi or the Latvian chamber orchestra “Sinfonietta Riga”.