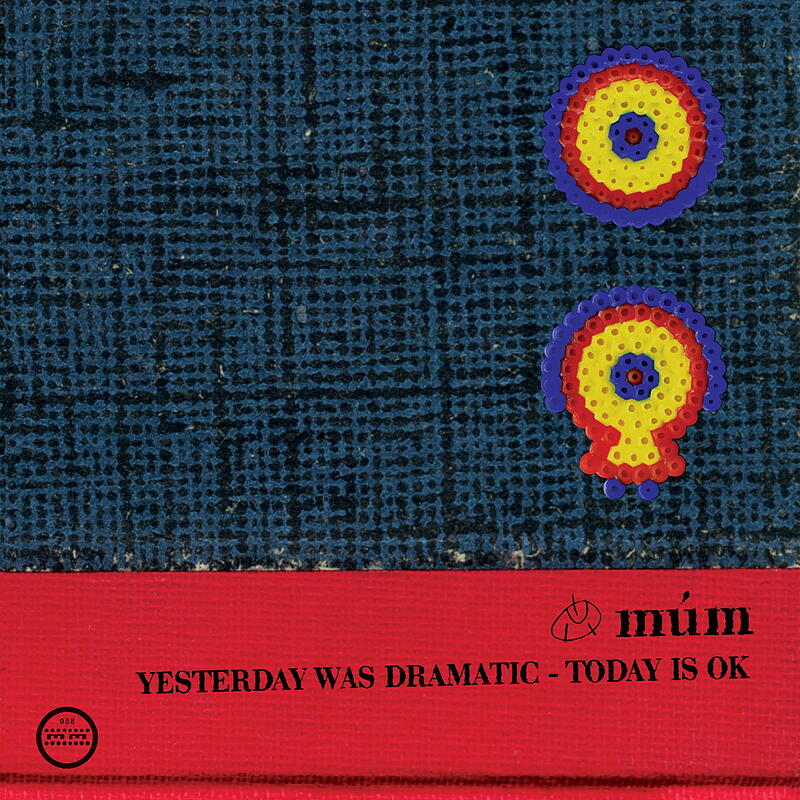 Introduction by Örvar (múm): "This album was recorded very shortly after me and Gunni met Kristín and Gyda and we became a four people band. We had just been two in the band before and released a split "10 with the girl-band Spunk and played a few concerts. Yesterday was dramatic - today is ok was mostly recorded in a tiny, sweaty room in the summer of 1999 with carpenters banging nails around us, but sometimes we put on headphones so we couldn't hear them. It was originally released on an Icelandic label called Thule, but early on a number of disputes came up, which ended up dragging on for many years. Fighting over music is both sad and kind of boring, but sometimes there is really nothing else you can do. For us it is something worth fighting for. We have the rights for the record back now and are really happy to be re-releasing it on our friends label where it seems to fit in like home. And we have at last managed to make it sound pretty good, the way we always wanted, with the help of our friend Helmut Erler at dubplates and mastering. Let's hope things are finally OK. This is the first proper Europe and USA wide release of this album, fully supported by distribution companies who are in direct contact with the record label." It doesn't happen very often, in fact it almost never happens at all, that a record hits you out of nowhere. Completely out of nowhere that is and with full impact. A record by a group of teenagers that you have never heard of on a label that didn't even exist before and that sounds like nothing you have ever heard before, for example. For me múm's debut album YESTERDAY WAS DRAMATIC - TODAY IS OK was such a rare thing. Five years ago, I was working at a new job in a new city that didn't feel particularly welcoming. One evening a guy who ran a couple of Icelandic record labels, mostly known - if only by a rather small number of people - for their functional dance 12"s, arrived in a big rental car and handed me a copy of the album. I was hooked the first moment I listened to it. YESTERDAY WAS DRAMATIC - TODAY IS OK not only became an unexpected hit at our office but provided solace and comfort when you needed it. It gave a feeling of home while away from home. It's a record that you unintentionally start humming to after a while, anticipating the many odd sounds and plenty joyful melodic fragments before they arrive. "There Is A Number of Small Things", for example, starts off as a simple lullaby, growing more complex as it goes a long, before bursting into full bliss, while "The Ballad of the Broken Birdie Records" gives goose pimples from the beginning, enhanced by Kristin's distant sounding but emotionally affecting vocals. Part of the attraction of the album is its mixture of analogue instruments such as harmonica, accordion and glockenspiel with digital clicks and cuts. But what makes it so beautiful is that at no point this combination feels constructed or forced. While listening to YESTERDAY WAS DRAMATIC - TODAY IS OK you don't care how it was made you're just enjoying that it exists. Nothing can replace that feeling of discovering a record, a band, a new music for the first time. Today, if you should listen to YESTERDAY WAS DRAMATIC - TODAY IS OK for the first time (rereleased and remastered on Morr Music who have previously put out múm's remix ep PLEASE SMILE MY NOISE BLEED), you are more than likely to have already become familiar with múm's unique musical universe, a group who have so far succeeded in selling more copies with each successive album they released. Therefore it might not hit you out of nowhere but it will hit you nonetheless. It's simply a record that you don't want to be without once you've encountered it. - Heiko Hoffmann