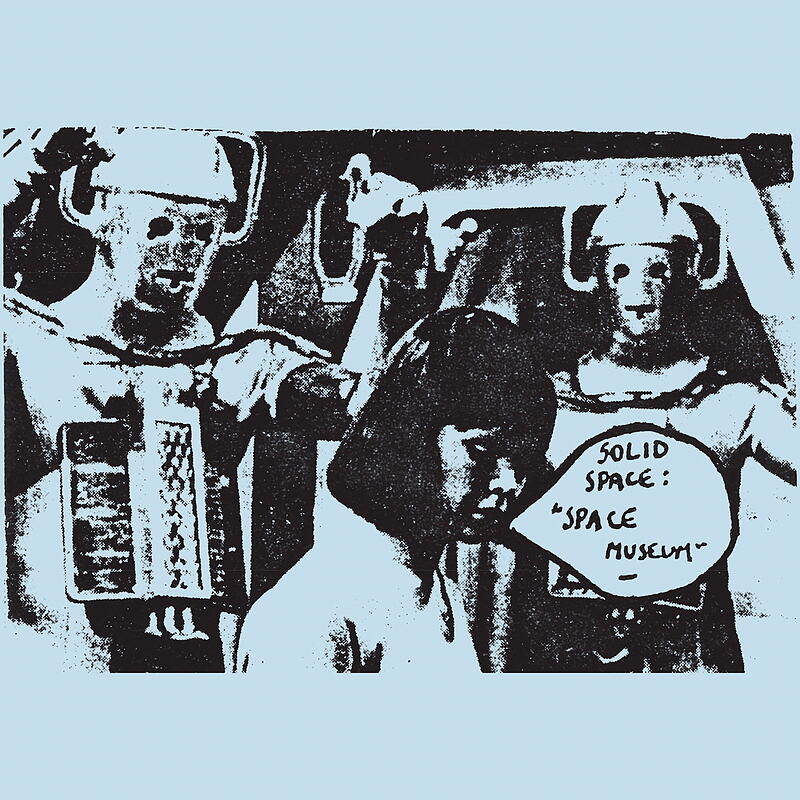 Dark Entries present the first ever official vinyl reissue of Space Museum by Solid Space. Solid Space was the British duo of Dan Goldstein (keyboards, vocals) and Matthew 'Maf' Vosburgh (guitar, bass, keyboards, vocals) formed in 1980. Dan and Matthew met at the age of 11 while attending school in north London. In late 1978 at at the age of 14, they formed Exhibit 'A' with Paul “Platypus” and Andrew “Lunchbox” Bynghall. They recorded two EPs in 1979 and 1980, self-released on Irrelevant Wombat Records and appeared on 'The Thing From The Crypt' compilation. After the dissolution of the group, Mathew started taking his guitar over to Dan’s house where he’d play his Casio MT-30 and they would record songs. Eventually a second hand drum machine and Wasp synthesizer were acquired from classified ads in Melody Maker and the Solid Space sound was born. By this time they were just turning 18 and finally found the freedom to make the music they’d had in their heads.

Over the course of the next two years the band assembled eleven bedroom recordings that would become one of the most cherished DIY obscurities of its kind. Their debut album ‘Space Museum’ was released in 1982 on cassette by In Phaze Records. All of the songs were mixed by label boss Pat Bermingham on 8-track tape at The Shed, in Ilford, which was literally a garden shed. The band's music and lyrics were heavily indebted to science fiction, in particular the 1960s television series Doctor Who. ‘Space Museum’ is an unveiling of atmospheric, minimalist post punk supported by bright melodies. The music combines drum machines and synths with acoustic guitar and toy drums whilst also experimenting with samples between tracks. Lyrics deal with space travel and a general sense of dejection. Representing a bubbling spirit within the underground, they foreshadowed an entire world of independent music which would emerge across the 80’s and well into the 90’s. For this reissue we’ve included two bonus tracks from the band’s archive, “Platform 6” originally released on the B-side of the second single by Exhibit ‘A’, this song features only Dan and Matthew and is the first Solid Space track ever recorded. “Tutti Lo Sanno” is a cover of In Phaze label mates Marine Girls, though the lyrics have been changed to suit the gender of the new singer.

Each song has been carefully remastered for vinyl by George Horn at Fantasy Studios in Berkeley. The record is sleeved in a replica of the cassette artwork featuring the Cybermen and Jamie from the Doctor Who episode "The Wheel in Space". Every copy includes a double sided 11x11 insert with lyrics, notes and never before seen photographs of the band taken by Maf as well as a postcard featuring an original advert for the cassette.