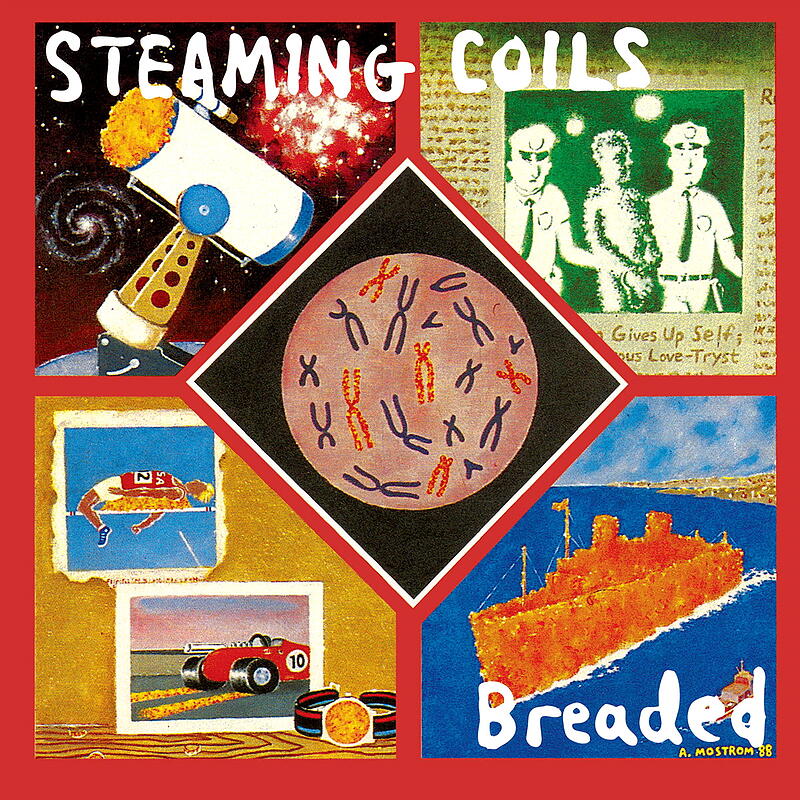 Medical Records continues to cut the strings holding it in 1 or 2 genres by presenting something just a tad askew. Hailing from the underground Los Angeles scene in the mid 80s arose a couple of musicians that created some of the most off-kilter, complex and yet exquisitely crucial art rock music that no one has ever heard. Featuring the key duo of Brad Laner (Savage Republic and much later Medicine, Electric Company, etc) and David Chrisman (3 Day Stubble), Steaming Coils was a project that also involved multiple other like minds from the L.A.F.M.S. (Los Angeles Free Music Society) amongst other misfits and kooks. They released a total of 3 albums including Never Creak (1986), The Tarkington Table (also 1987) and finally 1988’s Breaded. Technically, there is also an unreleased 4th album as well… For Breaded, the Steaming Coils honed their craft into a well-oiled but no less experimental machine. Featuring James Grisby (Motor Totemist Guild), Don Bolles (The Germs, Ariel Pink’s Haunted Graffiti), Tom Recchion (LAFMS) plus a slew of others. The tunes almost transcend description but culminate into a perfect pop album completely drenched in free-form passages, cut and paste tape experiments, atypical song structures and other elements that are equally difficult to make easy comparisons. The first track Carne Del Sol completely plunges the listener into it with backwards noise guitar, shifting tempos and lovely harmonious melodies to suck you in. The 2nd track Singing Notice manages to take you through a psychedelic circus motif whilst following a nice Beatles-esqu pop song framework interspersed with bits of other noise and found sound. One of the other absolute standout tracks is the 5th track Notes which is just as catchy and upbeat as it is hypnotic and freeform. Don’t get us wrong or be frightened, this album is an intensely engaging listen and managed to walk that razor’s edge between pop music and progressive experimental “inaccessible music”.

The original version(s) are all long out of print (original CD and LP reissue years later). The Re-Issue is presented in a full color jacket with original front cover art (chromosomal collage, if you will) on high quality 180gram colored vinyl. For this special edition, a bonus 7” is included with tracks from the unreleased 4th album (featuring Jim Goodall of Flying Burrito Brothers and Medicine as well as Eddie Ruscha from Secret Circuit) and also on colored wax. Limited Edition.