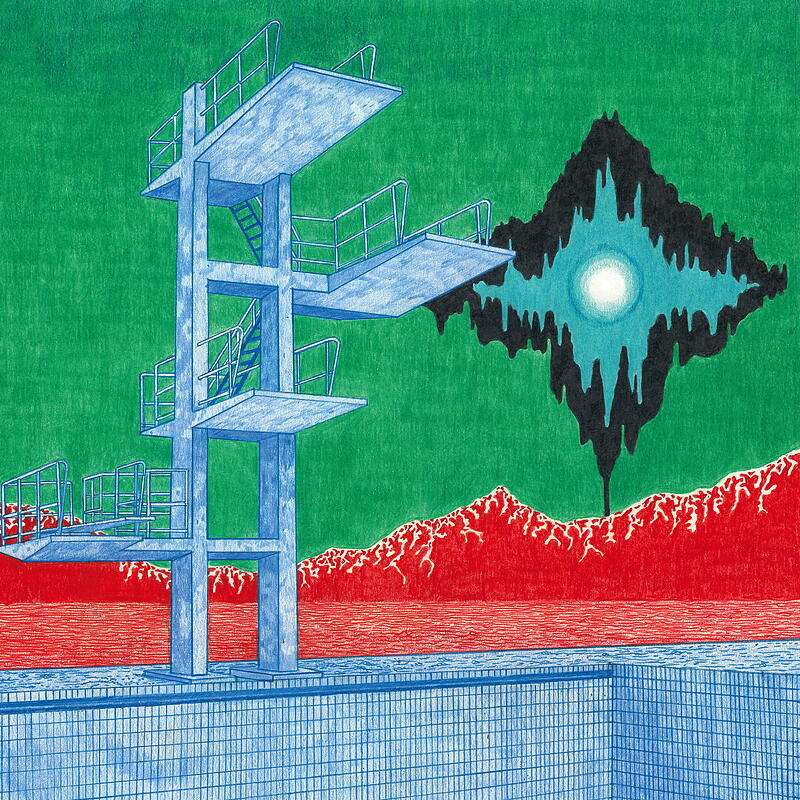 Alien Ensemble's trombone man Mathias Goetz caused quite a splash when he released his eponymous debut LP under his Le Millipede moniker back in 2015: The multi-instrumentalist's initial offering was clearly something else, impossible to grasp, a musical vessel beyond genre, beyond style or era, seemingly beyond space and time even; a vessel that carried an almost cosmic kind of song-craft – music with no fixed stamp of origin, though it did somehow feel like an Alien Transistor release. Followed by remix album Mirror Mirror, which comprised reworks by 1115, Protein, LeRoy, Olaf Opal, and Saroos, to name a few, it's now time for album #2: The Sun Has No Money.

Let's face it: There's nothing as majestic as the sun. At least not in our world. If it runs out of juice one day, it's game over: The End. Light's out. For everyone. At that point, it wouldn't even matter if you're rich or poor. We're all equal under the sun. Same level. And yeah, this might not be major news, but then again... we're talking about the sun. The sun! Guess it's about time to acknowledge its power and superiority, right? In fact, you can feel it on your bicycle: pedaling at night, when it's on duty in other hemispheres, and you're working hard at the dynamo, sweating, you can actually feel how powerful it is. In the end you get off the bike all recharged, a tune on your lips – and somehow feeling like a miniature version of the sun yourself. And whenever you feel like that, that's exactly the right moment to grab a melodica and get to work.

Following an initial warm-up round sans electricity, this new album soon begins to glow: Mathias Goetz aka Le Millipede doesn't need pedals, he boosts circulation by single-handedly* playing tons and tons of different instruments – it actually feels like thousands, easily. And thus begins a show that has countless levels to it: There are various sonic illusions... and yet Le Millipede doesn't hide anything: He's also willing to show the inner workings, the actual recording process and everything else. In short: he goes meta. Makes songs about making songs. That's right: why not use all these beautiful means to address the issue of money? It's not the sun that casts shadows; all it does is recharge, fuel: growth & thriving, that's the sun's area of responsibility. And yet there came a man whose plan was simple: steal the fruit from your garden, only to sell it right back to you, for money. We can hear the sea gulls crying in the distance, as somebody is throwing breadcrumbs up into the wind that carries their voices...

It's not the sun that casts shadows – all it does is radiate light. And yet there came a time when someone blocked those rays of light. Now if you're some kind of Diogenes, you'll simply say, “Move at least a little out of the sun.” But if you're a teacher, you'll maybe light up your pipe and use that to lighten up. What matters is that the percussion parts, in this case, resemble some serious musique concréte. The sun doesn't know shadows – all it knows, is itself. And yet somebody entered the picture and built an entire city. A city full of streets, so that houses can cast shadows into these avenues. Plus, there's music in the streets, music originally written inside the walls of said houses.

One of those streets is known as the Tin Pan Alley: a place that got its name from a music writer who compared the sound of so many pianos to the banging of tin pans. That sound: that's one side of the road that is this album. Some of these melodies appear to be shadows of earlier tunes, dating back to, say, 1898 or even before that, melodies that were first registered in the Tin Pan Alley publishers' offices back in 1912 or 1917. We actually get to see this Alley at that point in time. We see the ropes, the workings. How things come together, the actual act of creation. Suddenly, we can hear the shadows!

Okay, so one side of this street is America. The US of A. The opposite side: Russia. And smack dab in the middle: Europe. A pothole in the center. All the back-and-forth that occurs between these two poles ultimately depends on the movement of the sun. Night and day, taking turns, commuting in and out of sight. We get to meet Prokofiew's and Scriabin's ghost, among other spirits, reframed and published by Le Millipede's own imaginary label imprint on the historic Tin Pan Alley. Indeed there are moments on this album when Le Millipede seems to be playing Scriabin's clavier a lumieres (tastiera per luce), when his performance seems to be based on synesthesia, a wild cross-pollination of colors and sounds. In case you didn't know this: In the States, Prokofiew goes by the name Brian Wilson, and Scriabin's also known as Sun Ra – yet another guy who's usually broke, but gets to spend a lot of time out in the sun. Together, these assorted protagonists ask the people of the Antilles for Mutabor dance-tokens and send postcards to Moondog in Germany, right back into the darkness. On the postcards you can see people dancing the Biguine...

Firing foreign fossil fuels from all pipes (Brennelementsteuer!), Le Millipede controls the very center of this hustle and bustle: going as far as to employ some southern Chopped & Screwed styles, he's 100% current and zeitgeisty! Houston, we've got a problem: there's some kind of myriapod, centi- or millipede on the loose! Well, give me another sip of lean, sizzurp, dirty Sprite, and on goes the journey in the Pullman coach. Let's follow the sun! Keep on moving, keep things motorik! Here comes the Trans-Eureka-Express. Cherish the backpacking days! A piercing rhapsody of sound (bohrende Rhapsodie), we'll remember them fondly!

And thus things move on, the sun, the days, the earth: rise, set, action, round and round... onwards eternally. The sun: the biggest loop known to mankind. As if it was some kind of sonic Rube Goldberg contraption, time seems to be stretching out while listening to that hmmm. After all: time is a lot (a lot!) more than just money. And yeah, the sun is the real big shot on (or rather: above) Planet Earth.