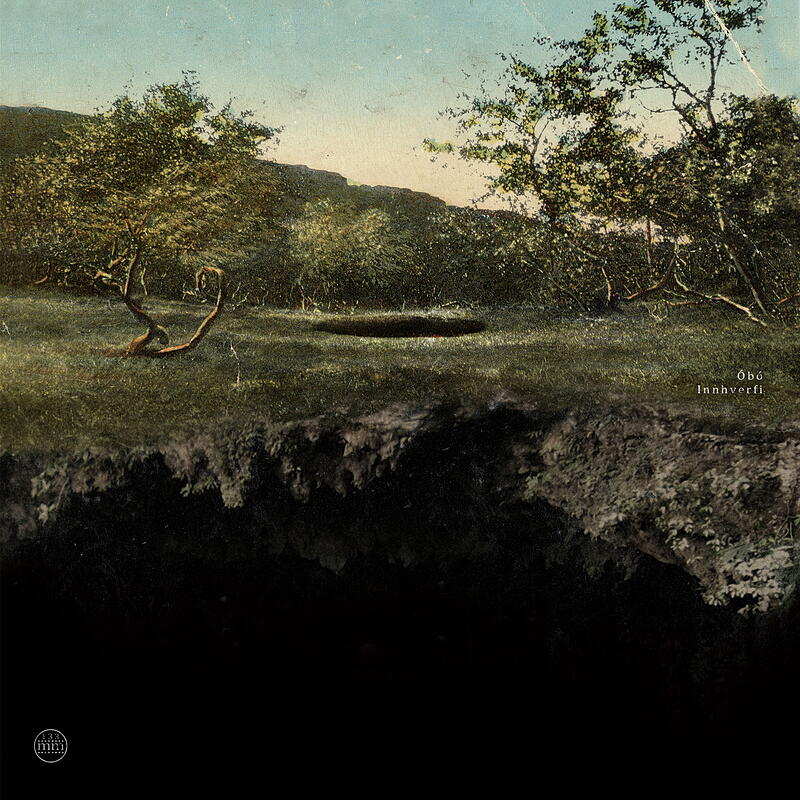 There are strange forces at work, lurking underneath the shiny, impeccable surface of this place: Looming behind all those perfect little fence posts and neighborly smiles, there's a sense of isolation, of emptiness, a hint of claustrophobia, that fear of being in the wrong place, too far removed from where things are really happening. It's true: darkness has fallen upon suburbia. Welcome to the unadorned world of Innhverfi.

Using a play on the Icelandic words for "suburbs" and "introvert" for its title, Innhverfi is the debut solo album from Sigur Rós' and Jónsi's touring keyboard player/percussionist Óbó – in his passport it says Ólafur Björn Ólafsson –, and although comprised of no more than 7 compositions, it does run the gamut of suburban bliss turned upside down: After the LP's minimalistic opener "Úthverfi", a track that melancholically opens up after a long, immensely dark and brooding intro, that ultimately offers some respite in the form of playful Glockenspiel over layers of slow-moving sonic lava, the equally cinematic "Svartur galdur" leaves much room for Óbó's trademark baritone: Like a bespectacled puppeteer with fluffy hair, he seems to shuffle and rearrange home-recorded bits and lullaby-like DIY pieces in front of our very eyes, which can't help but follow, as we move deeper into the somewhat forlorn suburban landscape that has inspired this record. Imagine dark, wet streets, overcast little alleys, and suddenly a cat or a candle on a windowsill, breathing slowly.

Elsewhere, "Gjallarhornin" – all spoken words, piano, strings, vibraphone, rearranged like a whirlwind in slow-motion – makes way for a hopeful oomph deferred and silent-movie era melodies, while "Stilla", an instrumental, commences like early Efterklang, but there's no gaudiness on the horizon: When the subtle electronics and percussions erupt in the end, it all feels just right – if only for a brief moment. Finally, the subdued birdsong and jazz-inspired piano of "Fyrirboði" underline that Ólafsson has worked on motion picture soundtracks in the past – e.g. The Good Heart, Steypa –, and before it all ends, he even throws in a foot-stompin' alt-pop song of sorts ("Rétt eða rangt?"). The last stop of this journey into the haunting underbelly of the suburban mind is "Gullregn": A creaking door that opens to unveil his own garden of forking paths, a place where one can still decide, shake things up, jump the fence and run, leave before it's too late. It's pure possibility, presented in a golden light.

Although Innhverfi is his debut effort as a solo artist, Óbó's musical handwriting has been all over the Icelandic map in recent years: A multi-instrumentalist and a wizard on percussions, he studied piano and later composition in various European cities and has performed and recorded with artists such as Sigur Rós, Jónsi, Emiliana Torrini, Stórsveit Nix Noltes, slowblow, Benni Hemm Hemm, múm, Jóhann Jóhannsson, Úlfur Hansson and Valgeir Sigurðsson, to name a few.

Though few will be able to understand the lyrics in his native Icelandic, one thing is certain: Innhverfi is the very antidote to the affliction and troubles it sketches out. Turns out we've been in the right place all along.