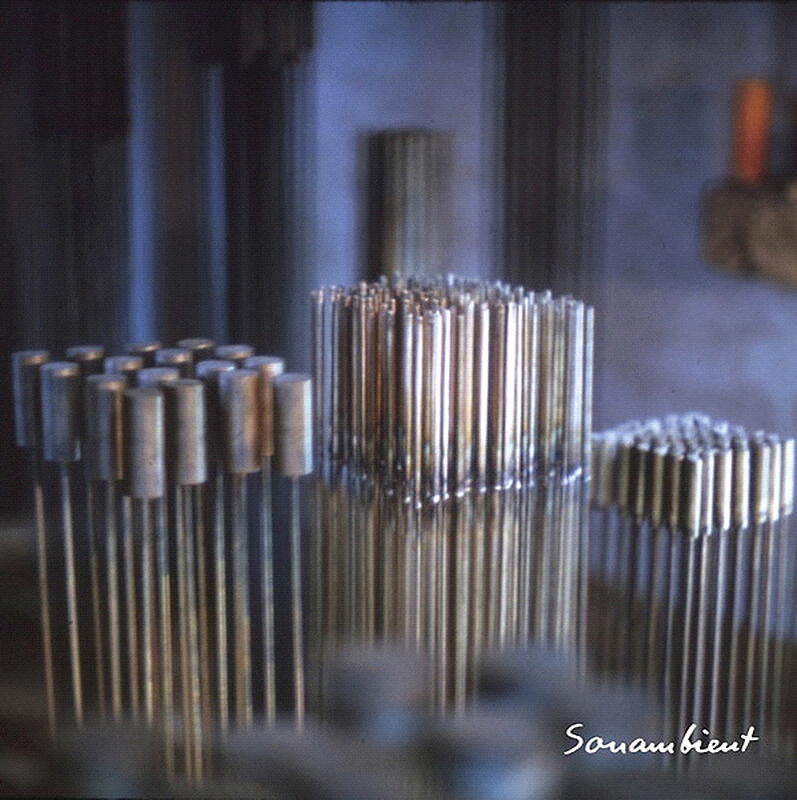 After nearly 40 years of silence, Harry Bertoia's Sonambient label has been resurrected in order to release the best of Bertoia's unheard recordings from his recently preserved archive of 1/4" tapes. "Clear Sounds" b/w "Perfetta" (F/W 1033) was cut straight from the original reels and is a true analog pressing (AAA).

These two pieces were selected for their minimal, meditative and lush harmonic qualities; lacking in the abundance of dynamics and contrasts found on the original Sonambient records, these pieces show another approach to performance. Slow washes of shimmering metallic sculpture rustle thickly like the leaves of a white birch or tall grass in the summer sun. Gorgeous harmonics hover overhead, making audible measurements of the length and purity of Bertoia's metal rod sculptures.

Background:
Harry Bertoia first came into artistic prominence in the late 1930's and his sculptural, ergomonic chairs , produced by Knoll Furniture beginning in 1952, were soon modernist furniture classics. Inspired by the resonant sounds emanating from metals as he worked them and encouraged by his brother Oreste, whose passion was music, Harry restored a fieldstone "Pennsylvania Dutch" barn as the home for this experiment in sounding sculptures which he had begun in the 1950's. Bertoia was an obsessive composer and relentless experimenter, often working late into the night and accumulating hundreds of tapes of his best performances; Oreste, too, would explore and record the sculptures' sounds during his annual visits to his brother's home in rural Pennsylvania.

Harry Bertoia's recently dismantled Sonambient barn collection was an attentive listener's paradise full of warm, expressive instruments that were gorgeous visually and audibly. Nothing could prepare you, even on return visits, for the overwhelming experience of entering the spacious wood and plaster interior where gongs, some of them giant, hung among the ranks of standing sculptures of various metals. Over nearly twenty years, adding, culling and rearranging, Bertoia carefully selected nearly 100 harmonious pieces ranging in height from under a foot to more than fifteen feet. He considered this barn a full experience, sights and sounds comprising not a collection of works, but one piece unto itself. It was here, deep in the woods, that his Sonambient recording work took place.

Learning by experimentation was common for Bertoia and he mastered the art of tape recording, turning the Sonambient barn into a sound studio with four overhead microphones hanging from the rafters in a square formation. He would experiment with overdubbing by performing along to previous recordings, sometimes backwards, constantly improving his methods while also honing his performance skills. Bertoia was a careful editor of his own work and only chosen recordings remained, each with a date and carefully considered observations written on a note included with each tape. Through these pieces of paper a greater logic can be uncovered, a careful approach to composition, ideas, feelings and forms. The story of Sonambient barn collection will slowly be told through the release of recordings from the archive as well as installations and performances built from Bertoia's own recordings, lectures and a book.