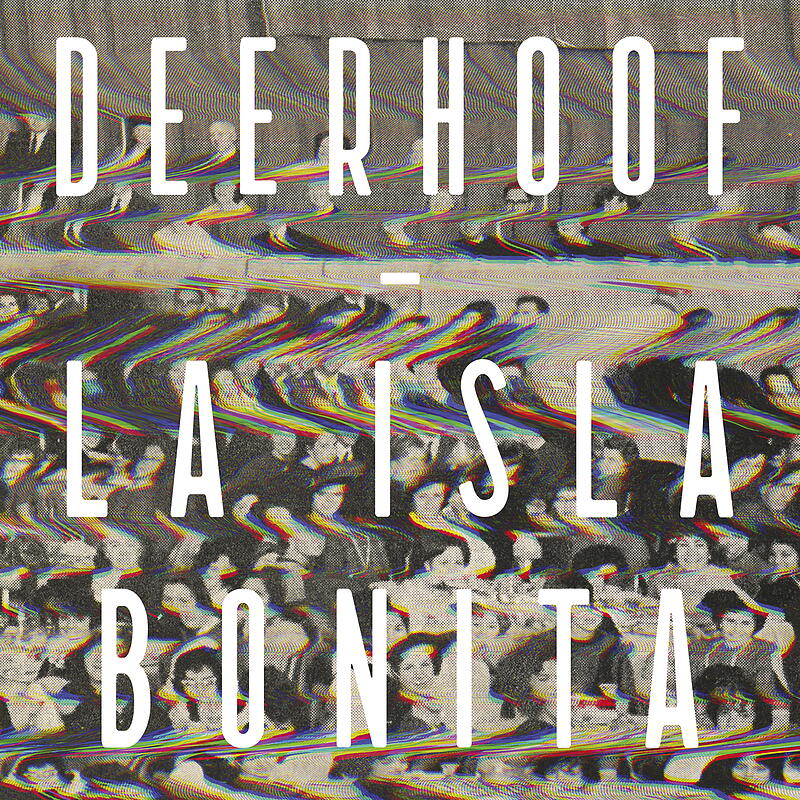 Blame it on the Ramones. After Deerhoof finished recording demos for La Isla Bonita this past February, they began rehearsing for an upcoming tour. Halfway through a run-through of a long-time Deerhoof live favorite, their cover of the Ramones classic "Pinhead," someone offhandedly asked, "Why don't we ever write a song like this?" So Greg quickly dashed off a song on a scrap of paper, showed it to the band, and they recorded the breakneck stomper "Exit Only" in one take. "And we suddenly realized," Greg says, "this is the whole thing, this is what the whole record is about!

A little background: For years, Deerhoof was the only band that sounded like Deerhoof. It wasn't a far-sighted career move, it was simply the only sound they knew how to make. Their early records were essentially rehearsals recorded on rubble. But in that rubble Deerhoof had planted a seed. And that seed took: when before the steady chug of post-Velvets indie had been the rule, Deerhoof's neck-snapping syncopations, classical melody, minimal gear and maximal music has slowly become part of the vocabulary: St. Vincent, Flaming Lips, Tune-Yards and Dirty Projectors are just a few of the bands to have absorbed some Deerhoof DNA.

Satomi, Ed, John and Greg have never become rich and famous but they've triumphed in their own way - this year, Deerhoof celebrates its 20th anniversary, having made a dozen consistently acclaimed albums and taken hundreds, maybe thousands, of ecstatic and loyal audiences all over the planet on the never-the-same-twice thrill-ride of their live show. "We neither had it all nor shall we," sings Satomi on "Black Pitch," from La Isla Bonita. "We are just fine without your promises."

At a soundcheck last year, Greg had started playing the beat to Can's trancey classic "Vitamin C," and right then and there, the band resolved to make a groove record, with streamlined arrangements and killer repeating riffs. The concept soon expanded into a paean tofin de siècle decadence - "our late-capitalist American version of waltzing into oblivion," says Greg. The band eventually convened at Ed's house in Portland, Oregon and set up a makeshift practice room in his musty basement. For a week they banged out rough rehearsal demos to send to producer and Godmode Records honcho Nick Sylvester, who had been an early, ardent and influential Deerhoof supporter back when he was a music critic for Pitchfork and the Village Voice. No one gave much thought to microphone placement and other technical matters, or playing the parts perfectly, or even staying in tune. It was unselfconscious, spontaneous and fun, all four musicians playing in the same tiny room at the same time. "We forgot," says Greg, "that the camera was there."

When they listened to the tracks, the band had an epiphany: it was nothing but guitars and drums recorded in a basement and yet the music was ineffably evocative and powerful. They realized they had just recorded their new album. Funnily enough, this was how Deerhoof had begun, and now they had perfected it.

In May, Sylvester recorded the vocals, and that's where the album's pop side comes out: Satomi's singing is front and center, and if it sounds like she's commanding the band, it's because she was. Satomi was determined to make a record that was not just for hardcore Deerhoof fans but instead would speak to everybody. As the inevitable temptation to sweeten the mix and edit down the takes crept in, Satomi kept everything focused on repeating grooves and simple arrangements. So instead of a blink-and-you-missed-it approach, we get the devastating one-note ostinato on "Big House Waltz" or the whiplash syncopations of "God 2." La Isla Bonita happily serves its riffs up on a platter. And it rocks.

But there's a darkness to the songs. While Satomi's voice might ring like a sweet bell, John and Ed's guitars resound with uncanny, virtuosic abandon, and Greg drums with his ingenious wallop, the gnomic lyrics juxtapose images of false paradise with a sense of declining empires and decay, a foreboding portrait of an American Weimar. "Mirror Monster" is an exquisite ballad, one of the most beautiful things Deerhoof has ever done, with classical chords and prismatic guitars and dramatic key changes, but it's also an angry, post-apocalyptic song. In "Doom," there is no place to go, punctuated by one very damning word - "deny" - delivered in a child-like sing-song that counterpoints its ominous implications. "Oh Bummer" is a cryptic indictment, mournful and eerie, and the music is downright cataclysmic.

Still, Deerhoof can't resist infusing the gloom with joy. And so La Isla Bonita is punk rock in yet another sense: it shouts "No!" in the most life-affirming way. It is the glorious sound of four musicians owning their own hard-won and richly deserved legacy. Even as western civilization goes down the tubes.