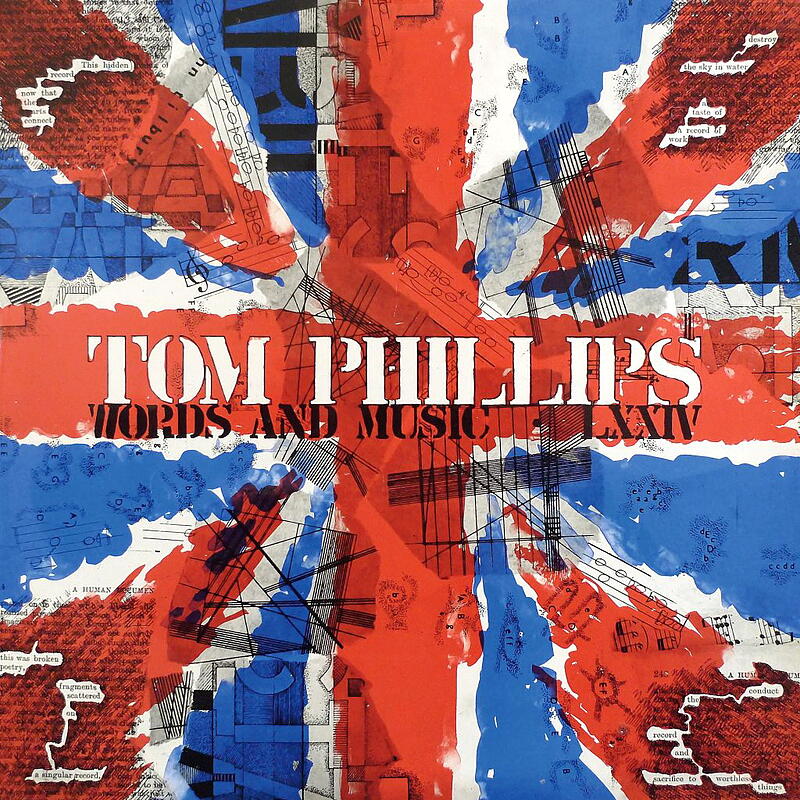 Words and Music is a rare and sought-after album by artist Tom Phillips (b. 1937). Fueled by painting, opera, and concrete poetry, this LP was originally published by the king, Hansjörg Mayer, in 1975 (this LP has never been repressed).

Most are familiar with Tom Phillips' "After Raphael" painting used on the cover of Brian Eno's Another Green World LP, along with the television series he made with director Peter Greenaway, A TV Dante (1990). However, Tom's crowning achievement is his art-book A Humument: A Treated Victorian Novel. A reworked version of the obscure book, A Human Document, by W.H. Mallock, each page laboriously painted and collaged over. Spools of text are re-discovered from the original book, stitching together a new story surrounding the protagonist, Toge. Six editions have been published from between 1970 and 2017, each with different texts and paintings imagined. Phillips' work has the air of forlorn fantasy to it ... a designed romance.

The first side of Words and Music contains four chamber works grown from impressionistic and graphic scores. A lovely flavor of British experimental composition à la Cornelius Cardew (with whom Phillips collaborated in the Scratch Orchestra). Tom's music incorporates touchstones of visual art: in his Irma opera, a band of voice colors wash over slides of chamber melodies; in "Ornamentik," (commissioned by Stuart Dempster) acoustic and electronic instruments are played as extended shapes along a piece of paper. The piano piece "Lesbia Waltz" augments sheet music, cut-up measure by measure, placed and replaced.

The second side of the LP holds readings from his famed book, A Humument. Recited by Tom, whose chestnut voice perfectly carries the stanzas of bizarre, romantic poetry. Dancing between discoveries and meanings with gentle blood and ink soaking on each word.