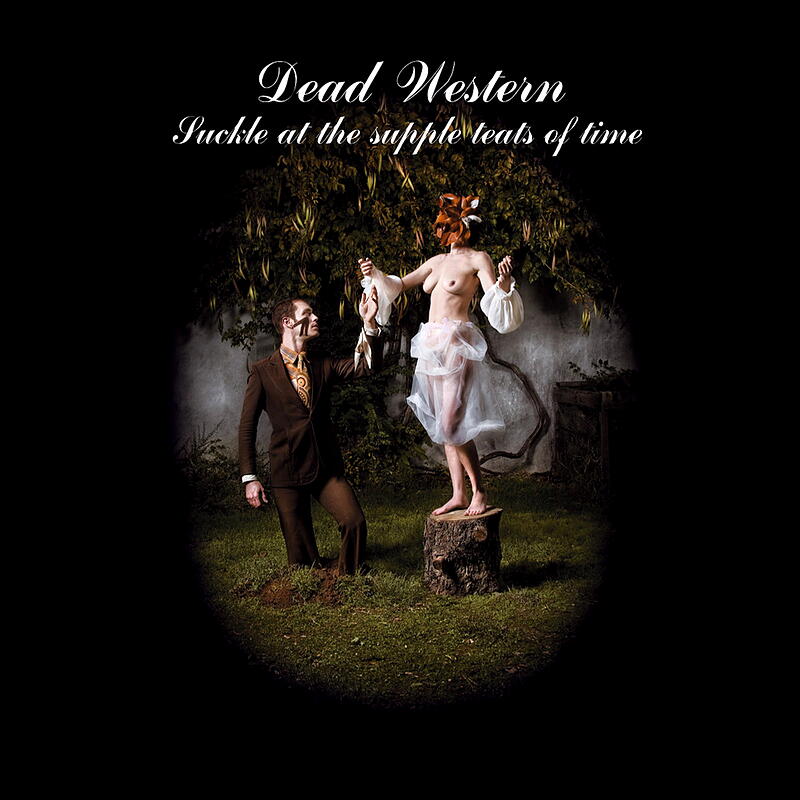 These lines shall speak about Dead Western, about music, and this with the precious quill which shall not scratch the deepness, nor betray too much, yet live up to the spoken-of. Let's just say, you will read a caterpillar and you will hear a butterfly eventually. Dead Western is Troy Mighty, who demands to live. Dead Western reaches out from the Psych-Folk happening of the US Westcoast.

»Suckle At The Supple Teats Of Time« reaches out with the familiarity of the dark and saddened guitar-based Folk, it surprises with the momentum of life, the comprehension of the beauty in life, confusion and self—it reaches straight to the heart. Troy's voice is like sound from the earth, a whole warm ground. The deepest and most dazing timbre you can imagine—his unique voice is the instrument that makes Dead Western even more special. He sings and shivers, soothes like a lullaby. The second full-length album of the wandering troubadour from Sacramento »Suckle At The Supple Teats Of Time« opens already with enchanting sadness but the sorrowfulness of the sensitive mind. A mind that wants to suck in the world but struggles to find its place in it. Rising up on »Not Really Here At All«, a song of love, a children choir declaring »We will fill the air content in calm and grace, as we sing to those who complicate: Please keep your weapons out of space! Please throw your weapons in the garbage can!«. Later on »A Father Ain't A Man«, it cuts your heart right in two, baring the struggle of paternity and a father disconnected from his child. The frankness of these songs is loose and free, expresses fear, joy and even directed critique. What makes these songs so universal is the reappearing thought they are holding, of other places, people and time. A longing for and awareness of things far from sight.

The carrying instrument in Dead Western is the acoustic guitar, one that is patient with the mind singing to it. The gently picked guitar weaves a subtle net, in which playful sounds like violin (played by Extra Life's Caley Monahon-Ward), bass (Jesse Phillips), percussion (Kevin Corcoran), chord organ, kazoo and a singing saw appear here and there and exist comfortably. These and other instruments played by Troy build a family and its members tell each song's story in their own way, their own sound. Dead Western is a subtle child, but one with the backbone of an old man. It is intuition, feel and nature that sings the songs of Troy. Dark and creepy, but longing for a brighter world, for love and space. Peace and understanding. What's so funny about? »Suckle At The Supple Teats Of Time« is the soundtrack to your fever dreams. Songs that sound like they have been here for hundred years, music you can hide within and brave the world outside. The ten songs on »Suckle At The Supple Teats Of Time« are for those who have an ear and a heart that swings with dissonance. And you might need to climb in a wooden horse to get to the heart of this Dead Western.