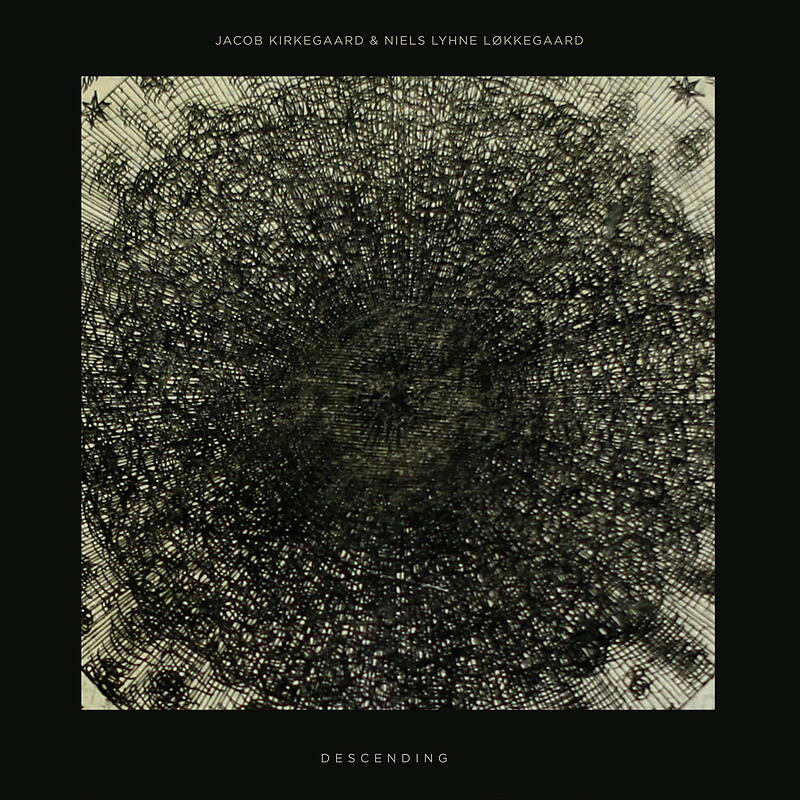 Descending is a composition consisting of two movements for room resonance, triangles, shakers and horns. The recording was made in August 2015, performed by the Aarhus Jazz Orchestra. Descending is Løkkegaard's and Kirkegaard's first collaboration.

The sound artists and composers Jacob Kirkegaard and Niels Lyhne Løkkegaard are both renowned for their ability to convert sound into a form with the character of an artwork and a bodily dimension that can be experienced by more than the ears alone. In his art, Jacob Kirkegaard uses acoustic phenomena that are usually either overheard or inaudible to the human ear. Using a range of sensors and recording methods, the material unfolds in compositions and spatial, visual and sound works. Niels Lyhne Løkkegaard's art focuses on the multiplication of sound, extending it beyond its usual boundaries to re-emerge in new forms, as well as on the creation of imaginary musical works that the listener has to envisage before their inner ear.

Jacob Kirkegaard (b. 1975) graduated from the Academy of Media Arts in Cologne in 2006. His sound works are published by Touch (UK), Posh Isolation (DK), Von Archives (F) and Important Records (USA). Kirkegaard's works have been presented at a wide range of renowned exhibition platforms, festivals and conferences worldwide, including MoMA and Issue Project Room & The Stone in NYC, KW & Transmediale in Berlin, Mori Art Museum and Aichi Triennale in Japan, as well as Louisiana Museum of Modern Art and ARoS Aarhus Art Museum in Denmark.

Niels Lyhne Løkkegaard (b. 1979) studied at Denmark's Rhythmic Music Conservatory and the Royal Danish Academy of Fine Arts' School of Architecture. He has created a wide range of works operating at the intersection of experimental music and sound art, including the soundtrack for MoMA's René Magritte exhibition The Mystery of the Ordinary in 2013. More recently he has created the critically acclaimed series SOUND X SOUND. Lyhne Løkkegaard is also the founder of the curatorial non-event Curatorium – a sound festival that never takes place.