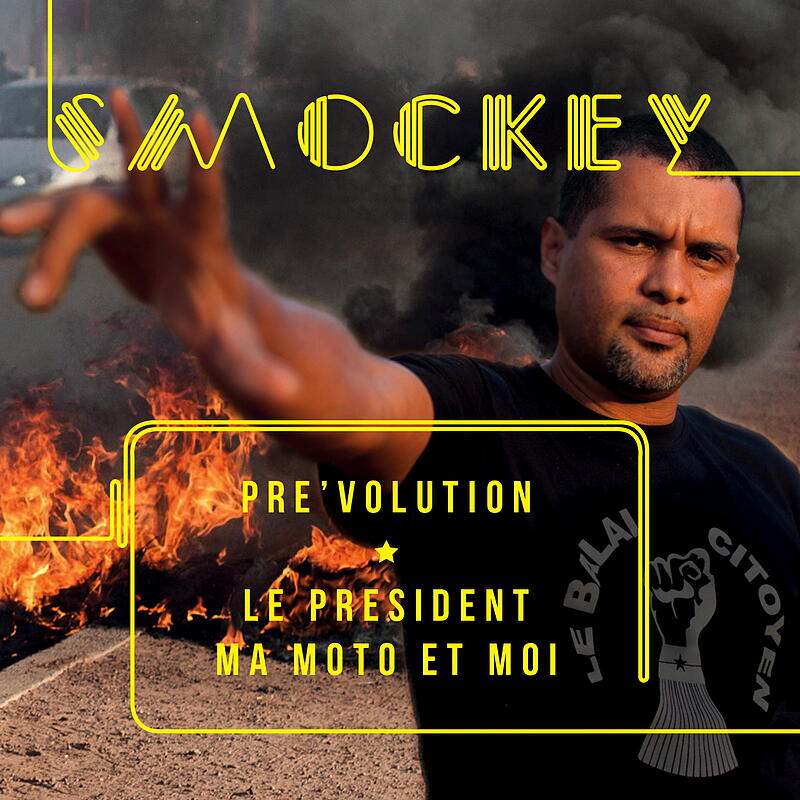 All seemed possible in Burkina Faso. It sounded like a fairy tale to good to be true. Last October the people had kicked out long time president Blaise Compaoré after he had declared he wanted to stay in power for a third turn. New democratic elections were set up for October 11th. Now with the elections approaching a military coup hit the country on the evening of the 16th of September. In the midst of it all: Smockey activist, rapper and spokesperson of "Le Balail Citoyen" a youth movement for a better Burkina Faso: "Le president, ma moto et moi" was supposed to be released on election day October 11th now it seems it is witness of an episode in history to be continued.

"Le president, ma moto et moi" takes you straight to Ouagadougou the capital of Burkina Faso. In the song Burkina Faso's Hiphopstar Smockey imagines taking the former president Blaise Compaoré on a motorbike ride through Ouagadougou. He shows him around the poor areas of town, schools that don't function, poverty and a frustrated youth demonstrating on the streets against being deprived of their future. Suddenly due to a power cut the traffic lights go out. That leads to an accident on their motorcycle. An ambulance brings the president to the Hôpital National Blaise Compaoré. Even though it carries his name, it is in a miserable state; they can't help the injured president, no oxygen supply. Welcome to Burkina Faso

In October 2014 the people of Burkina Faso took to the streets. They were sick of a government ignoring their needs. Smockey and hundreds of other protesters wanted to get rid of Blaise Compaoré and his cronies, the countries despot, reigning for almost 30 years. On day ten of the riots, Blaise Compaoré held a referendum to change the constitution to be able to run for presidency for another period. It was this exact day, the 30th of October 2014 that the protesters decided, they can't take it any longer. The masses stormed into the headquarters of the ruling party and into the parliament building and set both a blaze. Eventually Compaoré dissolved the government and decided to step down. He left the country overnight for neighboring Côte d'Ivoire. With the elections coming up tension is rising again in Burkina. On 16 September a military coup takes place and the interim president and his prime minister are taken hostage. Smockey had to go underground because the situation has became dangerous for activists in his country. The elections planned for October 11th 2015 seem in danger. Smockey's album "Pre'volution – The president, ma moto et moi" is the soundtrack to what has been going on.

Over the last year politically concious HipHopstar Smockey has become the spokesman of the protest. Together with his comrade, Reggae artist Sams K Le Jah, he started "Le Balail Citoyen", a movement comparable to "Y'en a marre - enough is enough" in Senegal. The aim is to bring together artists, students and intellectuals to widely rise awareness and encourage political participation. "Le Balail Citoyen" translates into "the broom of the people". The useful tool signalized to the people of Burkina Faso that an ordinary person can participate in wiping away corruption, cronyism and the political clique of Blaise Compaoré. Their slogan was "Notre nombre est notre force" and the broom became their symbol. Every time Smockey spoke in public, he held up a broom in his hands. This is also a reference to the revolutionary Thomas Sankara, who organized weekly street-cleaning sessions in the 80s. After a coup d'état Sankara became the 5th head of state in the independent Obervolta and was seen as a politician with a vision for a better future. In the last years he has become a symbol of hope and integrity especially for the youth in Burkina. The African Che Guevara fought for the people modelling his country after socialist Cuba. 1987, only four years in power, Thomas Sankara was overthrown and murdered by soldiers of his successor Blaise Compaoré. With "Le Balail Citoyen" Sankara's spirit returns.

"Pre'volution – The president, ma moto et moi" brings together songs written by Smockey during and before the uprising in Burkina Faso. "On Passe A` L'attaque" tells you how to wake up and kickstart a revolution. "Dossier Zongo" talks about political crimes during the regime of Blaise Compaoré. The freedom of press and the murdering of journalist Norbert Zongo. During the riots the song became an anthem accompanying the protests. "On se développe" is dedicated to the revolutionary leader Thomas Sankara. He was a great supporter of the local textile industry and build factories and plants. Most of them were closed when Blaise Compoaré took over. Smockey wants to encourage young people to reactivate a healthy local industry, instead of staying dependent on foreign products from the US and China. "Paroles" and "Dans la Peau d'un mulatre" were written for the theatre production "Nuit Blanche à Ouagadougou" were Smockey is the main character and plays himself during the revolt. The rehearsals took place during the actual protest. After building barricades at the place de la revolution Smockey went to rehearse often with a jacket smelling of teargas. "Operation Mana Mana" is an anthem of the movement "Le Balail Citoyen". It features many artists that are supporting the movement, as well as Smockey's companion Sms K le Jah. The song was written before the revolution in Burkina Faso kicked out the president in 2014. It delivers the perspective of the young generation about what is going (wr)on(g) in Burkina Faso. At the same time it is an outcry for democratic change.

Smockey has been campaigning for fair elections and a better future for his country. With slogans like "après la révolte, ton vote". "Le Balail Citoyen" is back on the streets now demonstrating against the coup d'etat that took place in the evening of the 16h of September threatening all their efforts for a better Burkina Faso.