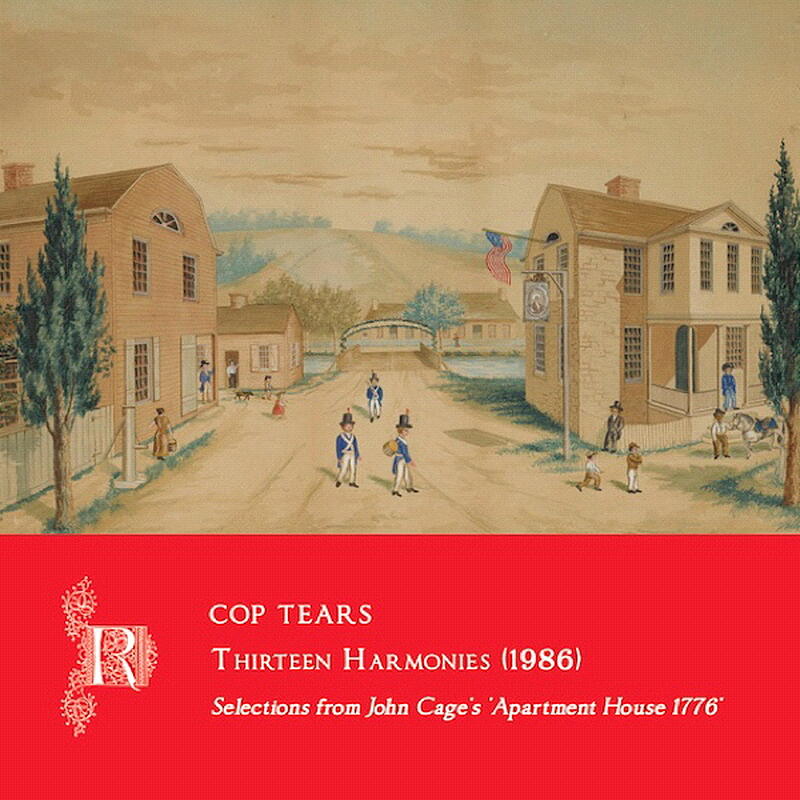 I have been a fan of Derek Baron’s music for only a small amount of time. But I appreciate how he and his cohorts blend technical talent and technical knowledge with abstract ideas and abstract approaches. Cop Tears is made up of Derek Baron, Cameron Kapoor, and Andrew Wilhite. This album is a four-track recording of the group playing one of my favorite John Cage pieces, Thirteen Harmonies. It was originally published in a tiny edition of 40 CDrs by Derek’s own Reading Group label. I thought it was beautiful enough to see the light of day again. I even got the John Cage Trust to sign off on the release! As regal as bored as humble as confused. - Sean McCann

Here is what the group wrote on the album:

Thirteen Harmonies is a selection from John Cage’s 44 Harmonies From Apartment House 1776, written for the American bicentennial, which itself is a selection of pieces in the colonial and early American choral canon. Arranged for double bass, electric guitar, and flute, from the arrangement for keyboard and violin, from the original four-part chorale, Thirteen Harmonies is an arrangement of a reduction of an arrangement of a reduction. The choral composers whose works were the material for Cage’s Apartment House were considered the avant-garde of choral music of the 18th century, and their music became the seed of Sacred Harp music, a radical lay tradition of the rural American south. John Cage composed the harmonies by way of erasure of the Protestant chorales and set them in an “apartment house” among other American voices: Native American ritual music, slave spirituals, and Sephardic incantations. What binds the lay experimentalism of William Billings and his contemporaries (all white American men) to the ‘multiplicity of centers’ of the Apartment House of John Cage (a white American man) is the destruction of a privileged musical space, the making-permeable of the division between the music of the piece and the sound of the people coming together to make the music of the piece. A positive destabilizing from within. Thirteen Harmonies was recorded live on two consecutive mornings in 2016 to a faulty 4-track on bled-through tape in Cameron’s apartment house in Queens, New York.