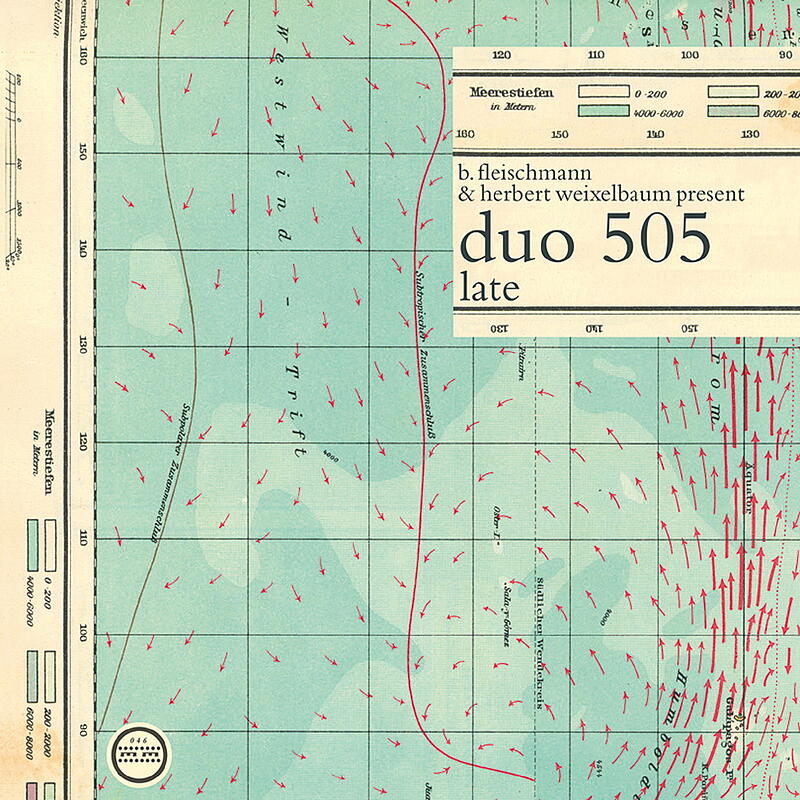 The Duo 505 is actually the brainchild of a restless hipster from Vienna. His name is Wolfgang Kopper and he is a regular face on the Gurtel, an area in Vienna, where lots of clubs, venues, musicans and artists settled down over the last decade. It was here that he noticed two completely different musicians, who had one thing in common, though: their hatelove for Roland's MC-505, better known as simply the Groovebox. One of the musicians is Morr Music's first ever recording artist B. Fleischmann, who, at that point, was still completely ignorant of his future partner in Duo 505, Herbert Weixelbaum. Herbert is a classically trained guitar player who at first didn't want to play anything else but classical music from the baroque and renaissance period. Somewhere on his way to adolescence, Weixelbaum changed his mind and started to spend uncountable hours with friends in a dark rehearsal room, he rarely even left for concerts. After all he made it out of there to move to finland, where he lived quite a while without doing any music at all. Returning to Vienna, Weixelbaum tried to reanimate his basement band, but quickly had to learn that Herbert and his mates were talking about music much more than they were producing it. He took this as a hint to go solo. A guy at the shop where Weixelbaum used to buy his guitar strings, introduced him to the Groovebox shortly after and even made him apply to a Groovebox competition. After Herbert had performed to a jury of Djs, they judged him by saying things like: "too depressive", "he doesn't use the Groovebox like it should be", or even "You're doing music for sundays!" Weixelbaum took these as compliments and felt confident enough to buy the Groovebox he initially only lent from the shop. But let's return to the Vienna hipster Wolfgang Kopper and his role in bringing the Duo 505 to life. When it came to think of a programme for the annual street festival "Gurtel Nightwalk" in Vienna, Wolfgang suggested that Bernhard and Herbert get themselves and their boxes together for a one off show. He introduced the musicians to each other and they clicked right away. The show was an instant success, they both took a liking to this band like way of doing music and decided to work together on a more obliging level. They quickly developed an approach, where one produced an entire track, the other picked up on it later in order to add his own perspective. Thus, a Duo 505 track is always two tracks, which mix and blend in a very sophisticated manner. Even the differences between Fleischmann and Weixelbaum as individual artists dissolve and make room for something new. What is most striking about Duo 505 is their direct impact. B. Fleischmann's level-headedness and his tendencies towards ambient soundscapes from earlier days for example take a huge step back in order to make room for a more expressive delivery. Both Herbert and Fleischmann want to rock! But in a pop way and within the technical limitations of their Grooveboxes, which makes their music Lo-HiFi, or was it Hi-LoFi? Anyway, their debut achieves the impossible by being a mildly melancholic, yet through and through life affirming feel good record. During the recording process, Herbert and Bernhard had to rely on at least a minimal ammount of verbal communication. While performing live, on the other hand, mouth and even eyes are replaced by heart and guts. They don't have to talk or look at each other to coordinate their actions, they just "feel" each other. So what was the sound of understanding each other blindly again? This record holds the answer! Thanks to the hipster from Vienna!