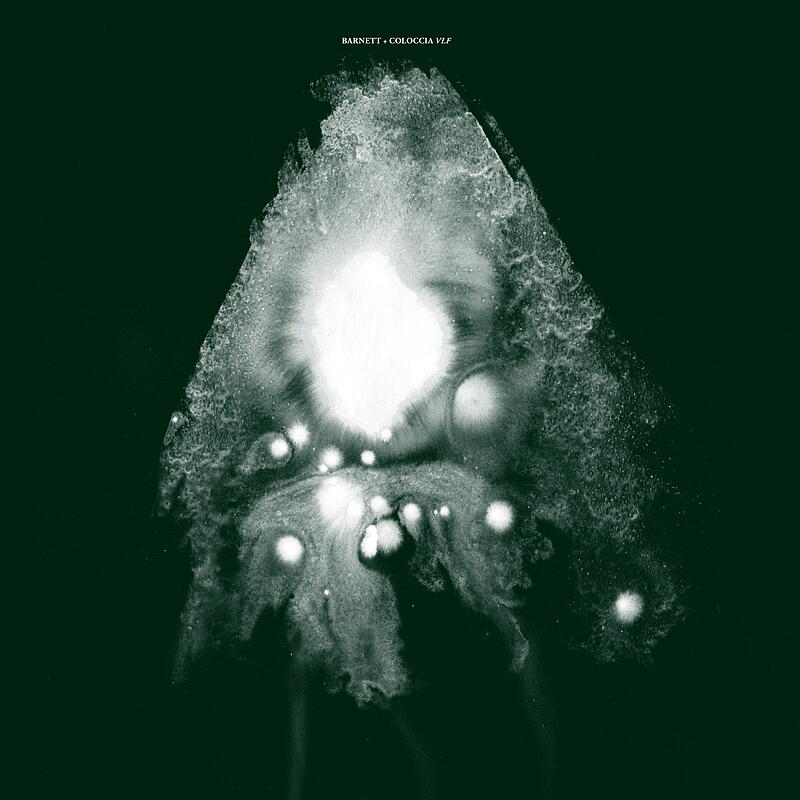 Alex Barnett (Champagne Mirrors, Oakeater, SCRAPES Recordings) and Faith Coloccia (Mamiffer, Mára) developed a friendship based on a fascination with the world just outside the limit of our understanding - the world where magic and mystery hold equal footing with science. On their third collaborative album VLF, the duo draft a soundtrack to the mapping of the unknown realms in both their private lives and the communal world around them. It’s a premise embedded in the album title, an acronym for Very Low Frequencies which help capture the oscillations of dark matter, as well as a misspelled nod to the VLA radar banks in New Mexico which serve to chart out the cosmos. This fixation on scientific pragmatism finds a creative parallel in the duo’s left-brain explorations of early electronic music, although the bigger influence in Barnett & Coloccia comes from the gaps in our understanding, where instinct drives our behavior and unseen forces impose their will on our surroundings, where certain frequencies inexplicably yield an emotional resonance and, conversely, subconscious impulse finds an analog in sonic patterns. These right-brain tendencies may conjure the minimalist mantras of 20th century classical music at one turn and the expressionist disorder of textural sound design at the next.

“We are both interested in getting ideas and thoughts, however intangible, into notations, or 'thought maps’,” Coloccia says of their process. “Like tarot cards there's geomancy, tea leaves, Italian oil water reading, I-ching Yarrow sticks - all supposedly based on chaos or chance and the energy of the mind shaping events of fallen twigs or sand, and then the interpretation of the reader. For us, we were really interested in tapes or sounds ‘coming to us’ and then interpreting them into different compositions for an audience.” The biggest treasure trove of found sounds for VLF came from a box of cassettes of old religious services for a regional cult. Gifted to the duo by a friend who had been raised in the faith, these documents of rituals, sermons, and glossolalia exercises tied into their fascination with divinations. Recorded over three days at a converted church called The Unknown in Anacortes, WA by Nicholas Wilbur with production assistance by Randall Dunn (Sunn O))), Johann Johansson), the songs on VLF began not with conventional song fragments or arrangement ideas, but with casual conversations regarding the curiosities of the natural world and the human psyche.

On songs like album opener “Fountain of Youth”, the shared fixations are less rooted in tangible phenomena and more tied to the abstract mania of individuals, with the duo summoning humanity's ever-accelerating attempts at escaping “the inevitable wear and proof of time” out of the track’s breathy vocals, scratching percussion, and clock-tower electric piano. The conceptual impetus is more evident on songs like “Confession”, which Barnett traces back to a conversation about the entanglement theory of synchronized heartbeats occurring between therapists and patients. With snippets of a found recording of a therapy session spliced between surges of static and steady bass pulses, the song may seem like it contains the most direct connection between sound sources and inspiration, until Coloccia mentions how entanglement occurs between mother and infant, how this enmeshment must eventually yield to individuation, and how her pregnancy during the VLF creative process was a constant guiding component. “The project is a true collaboration in the sense that the songs never end up as one person's vision,” Barnett says. “They end up somewhere new where the whole is a strange extension beyond the sum of the parts.”

Side 1 ends with “Bachelor's Grove”, which Barnett named after a haunted cemetery he used to explore with his friends. Guided by Coloccia’s ominous piano arpeggio, the song is a meditation on both the idea of death as the end of time and the idea of weak forces - vestiges of human presence imprinted on our world in scientifically unresolvable ways. With an impending birth looming over the VLF session, the counterpoint of death was an inevitable and inescapable theme for the album. “This was a parallel thought pattern we were having,” Coloccia explains. “Ultrasound uses sound frequencies bouncing off the uterine contents to ‘show’ you the baby. Much like the VLA - it was an attempt to communicate with space. There’s a parallel between outer space - the light we see that’s millions of years old in the form of stars - and the baby within the dark womb, a totally new being that came from nowhere.” The duo is not only interested in giving phenomena an aural manifestation, but perhaps even directing it, as with opener to side 2: “Rain In Bilbao”. Here Coloccia’s vocals, Barnett’s synth work, and reversed loops use music as a form of sympathetic magic in an attempt to conjure a specific environment and experience.

VLF is ultimately a document of two artists channeling their shared wonderment with unseen worlds into a sensory experience in the form of musical composition.