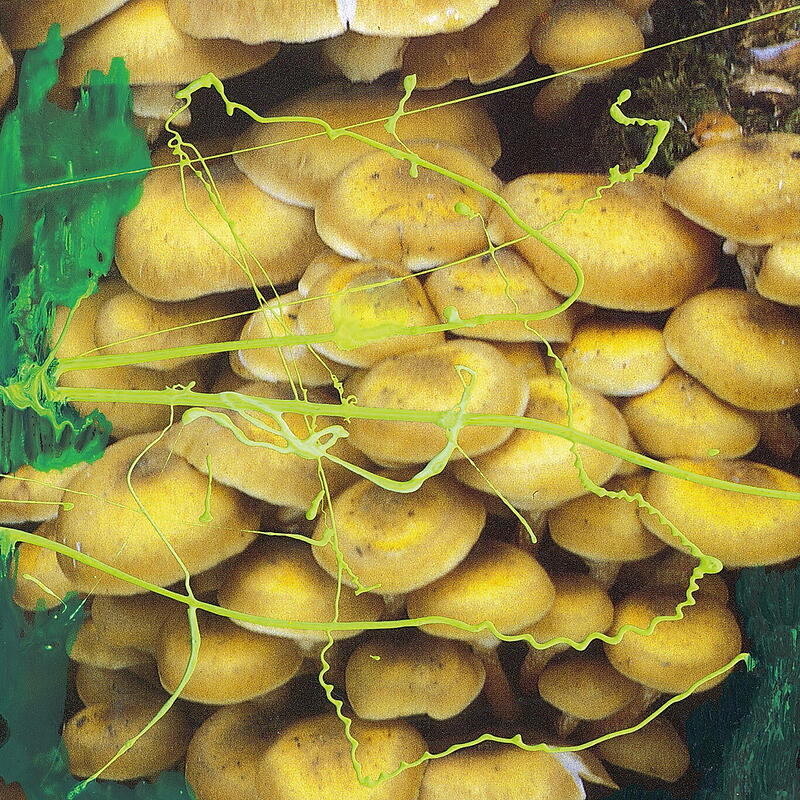 Realised thru a mesh of strategies from live, lo-fi tape recordings of synths, samplers and vocals to nascent experiments with algorithmic software, Untitled Death is both a divine revelation of new aspects to Teresa’s sound and an expansion of The Death of Rave’s as-yet-unidentified aesthetic.

Teresa’s zoomed photos of magic mushrooms spattered in popping fluorescent oils which adorn the cover of Untitled Death hint at a more personalised insight and psychoactivity, a proper, lush trippiness. Just like the putative psilocybic experience, Untitled Death naturally comes on in waves of synaesthically-heightened sensuality, from strangely libidinous stirrings to utter, eat-your- heart-out euphoria with a spectrum of hard-to-explain and unexpected sensations between.

We can hardly recall a more seductive album opener than Oh, which blossoms from plaintive drum machine and chiming pads to a half- or mis-heard beckon “I really like it / when you let yourself go / I really want you inside me / I want to make you my own”, before curdling into bittersweet partials and deliquescent hooks as earworming as anything from AFX’s SAW 85-92 classic.

It’s devastating in its simplicity and almost blush-worthy in effect, and is soon enough lopped curtly into the soundtrack-like enchantment of Untitled Death, which could almost be a cue from some ‘60 Polish or Czech art-house film, serving to neatly set up the prickling, windswept scene of romantic introspection and dereliction in Pain Of Outside - perhaps Teresa’s most accomplished and affective pop turn to date; think Grouper awkwardly blissing out at 9am in the corner of a successful sesh/campsite/free party.

From that perfectly damaged side closer, the B-side opens to a different sort of spine-freezing beauty and sense of abandonment with plangent, dissonant harmonics describing rugged Yorkshire wolds and coast as much as a radiant lightshow on the back of flickering eyelids.