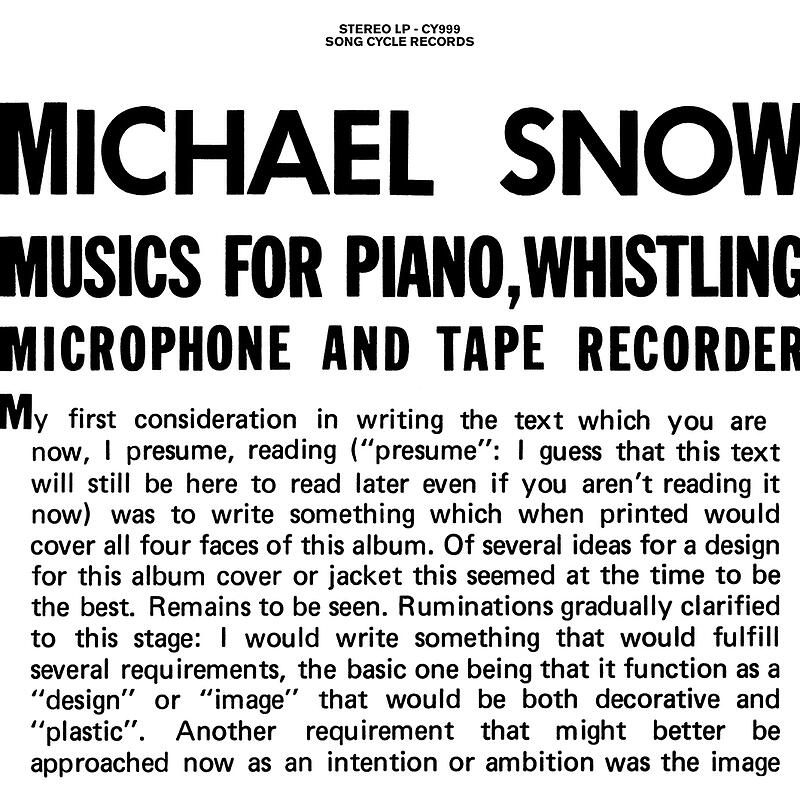 “During the years 1973 to 1978 I was represented by the Bykert Gallery in New York, which had the most prestigious stable of any gallery I have been associated with: Dorothea Rockburne, Chuck Close, Brice Barden, and other exhibited there. Klauss Kertess, one of the owners of the gallery, started a record company called Chatam Square, which issued the first Philip Glass recordings. In 1975, Kertess asked me if I would like to issue a recording of my own music.

I attempted to make an integration of the album jacket design, the label design for the two LPs, and the music itself.

The title of the album Michael Snow: Musics for Piano, Whistling, Microphone and Tape Recorder (1975), is quite explicit. The four faces of the album jacket are covered with a printed text that I wrote. By being printed in four diminishing size of type on the four faces (large on the front, diminishing on the two inner faces, and smallest on the back cover), the text design parallels the form of one of the pieces on the album, Falling Stars, which uses a little piano composition I composed and played. By means of recording at different speeds from one tape recorder to another, I made a piece in which this piano “phrase” is first played very fast (and high). The phrase is then repeated, slowing down to a normal recording speed, and then continues to slow down. The pieces takes two sides of an LP, the second side consisting entirely of the slowest version.

One of the two pieces, W in the D, is a twenty-six minute recording of solo whistling I did with a hand-held microphone as an instrument. The work is constructed of a large number of separated whistled phrases, each of which is preceded by the sound of my breathing in. My breathing in (and out) is recorded differently during each phrase by my moving the microphone closer to or further away from my mouth. Each whistled phrase is a newly invented “line” of no particular genre that could be sustained for as long as I had air in my lungs. The amount of air inspired determined the length of the “line”, and each line is different from its predecessor or its follower. There is no development; each virtuoso whistle is frame by the recorder intake of breath. The piece was “improvised”, but it is not jazz. W in the D was recorded and had its first public appearance prior to its release on the Chatham Square recording. I had been invited to present something in an evening of performance at NYU. I had all the lights in the auditorium turned off and played Whistling in the Dark through the auditorium PA.”